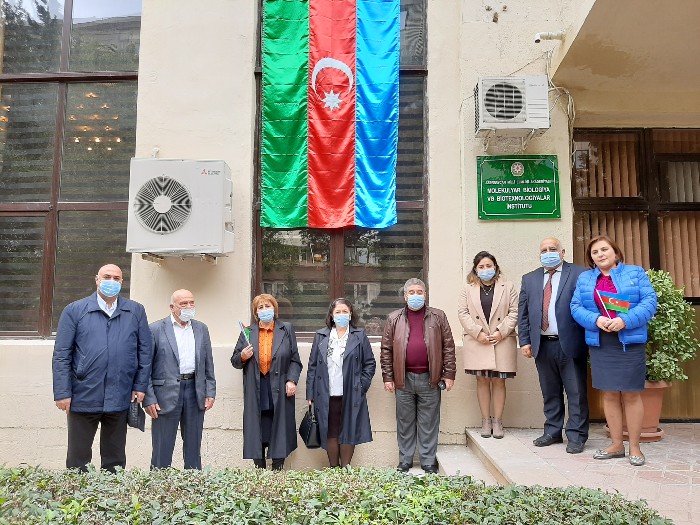 On November 10 an event on the occasion of our Great Victory was held at the Institute of Molecular Biology and Biotechnologies. First, the memory of our martyrs who died for the freedom of our homeland was commemorated with a minute of silence. Opening the event, vice-president of ANAS, director of IMBB academician Irada Huseynova said that today was a historic day. Azerbaijani Army under the leadership of the Supreme Commander-in-Chief, President Ilham Aliyev started a victory march on September 27 to liberate our occupied lands. As a result of military operations lasting 44 days occupied districts Jabrayil, Gubadli, Zangilan, Fuzuli, Shusha, thousands of villages, numerous strategical heights were liberated by Azerbaijani Army. Thus, our glorious army under the leadership of the Supreme Commander-in-Chief has demonstrated its power to all the world within 44 days. The people of Azerbaijan have once again proved to the whole world they are a great, patriotic nation, people with an iron will. On November 10, the presidents of Azerbaijan and Russia and the prime minister of Armenia signed a joint statement and according to this statement, the territorial integrity of our country was ensured. . President Ilham Aliyev has forever written his name in history as a person who realized the greatest dreams of our people.