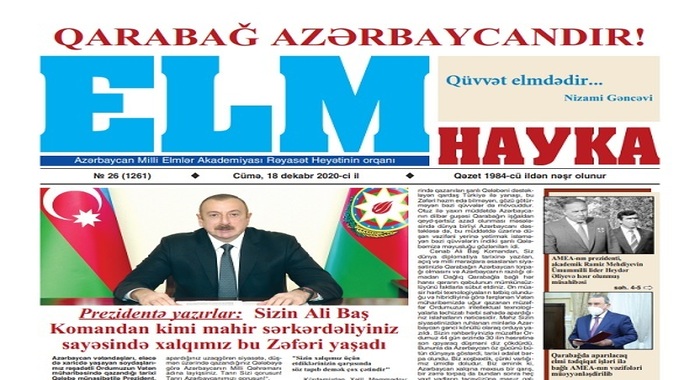 The 26th issue of "Elm" newspaper, a weekly press organ of the Presidium of ANAS, was published this year under the slogan "Karabakh is Azerbaijan".

The first page of the newspaper contains letters of thanks from the citizens of Azerbaijan, as well as our compatriots living abroad to the President, Supreme Commander-in-Chief Ilham Aliyev on the occasion of the historic victory of our brave army in the Patriotic War.

In the following pages of the publication, the Order of the President of the Republic of Azerbaijan, Academician Ramiz Mehdiyev's interview dedicated to national leader Heydar Aliyev, meeting of the Presidium of ANAS, speech of academician Isa Habibbayli at the event dedicated to the prominent Kazakh poet Abay Kunanbayev, donation transferred to the "YASHAT" fund by the Institute of Biophysics, as well as meeting with young people in Nakhchivan Branch.

In addition, you can read articles, publications, scientific innovations and other news.