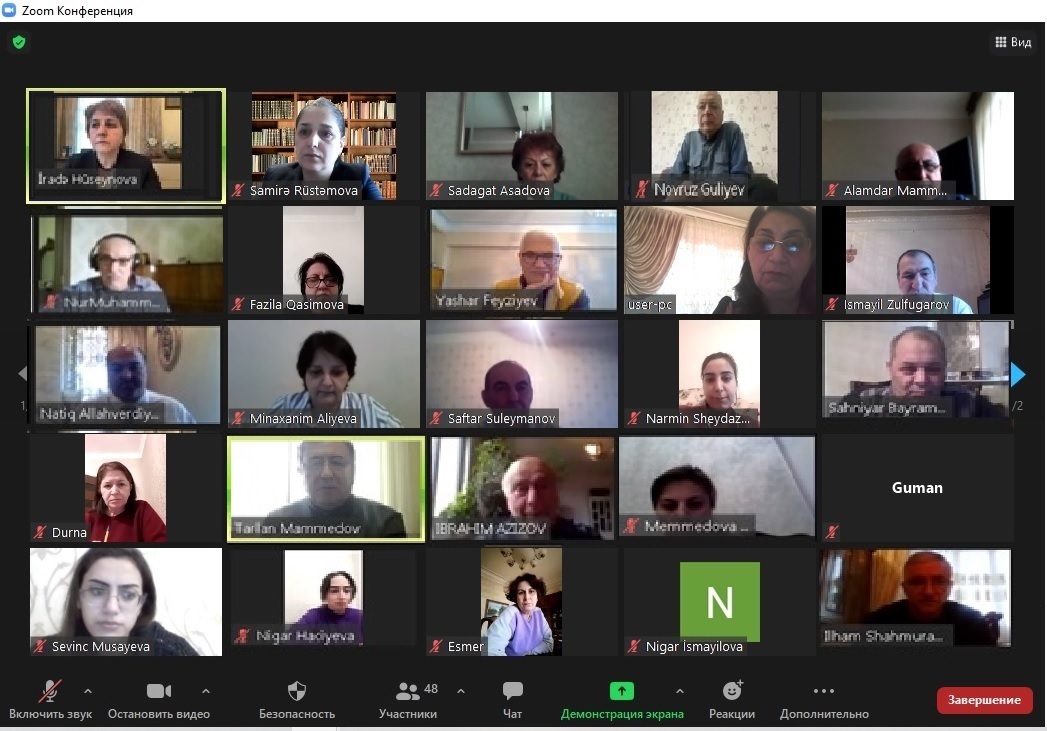 Today an online event dedicated to the 31st anniversary of the January 20 tragedy was held at IMBB on the Zoom platform. Director of the institute, vice-president of ANAS academician Irada Huseynova opened the event and spoke about the massacre committed by the troops of the Soviet Empire against the Azerbaijani people in January 1990. This tragedy, which will live forever in the blood memory of our people, is widely celebrated in our republic every year as the National Day of Mourning. On the night of January 19-20, 1990, an unprecedented war crime was committed against the civilian population in order to stop the growing national liberation movement in Azerbaijan and break the will of our people to independence. Academician noted that the January 20 tragedy, one of the pages of glorious history founded the way to lead to sovereignty. At that time, only our national leader Heydar Aliyev, demonstrating political will, came to the Azerbaijani representation in Moscow and made a statement strongly condemning this crime committed by the USSR leadership. After returning to the leadership of Azerbaijan, on the initiative of Heydar Aliyev, in January 1994, the Milli Majlis gave a political assessment of the events of January 20. "Martyrs do not die, they live forever in our hearts," said President Ilham Aliyev, taking important measures to perpetuate the memory of January 20 martyrs and glorify their names.

Correspondent members of ANAS Ibrahim Azizov, Novruz Guliyev, Tarlan Mammadov, Head of the Proteomics laboratory Ismayil Zulfugarov, deputy director on general affairs Natig Allahverdiyev, Chairman of the Women’s Council Fazile Gasimova, Chairman of the Young scientists and specialists Council Ulduza Gurbanova, head specialist of the department of International and Public relations Nigar Hajiyeva characterized the martyrs of January 20 as a symbol of heroism of our people.