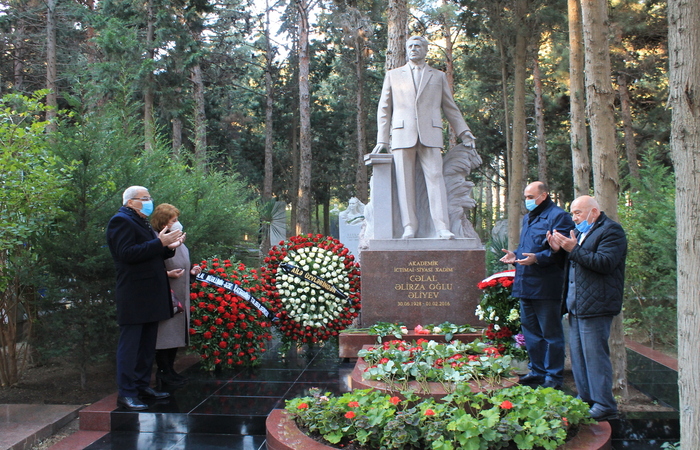 On February 1, five years have passed since academician Jalal Aliyev's death, who was a world-famous scientist, socio-political figure, creator of new directions of biological science in Azerbaijan, Honored Scientist, awarded the highest state awards of Azerbaijan - "Istiglal" and "Sharaf" orders, "Honorary Diploma" of the President of the Republic of Azerbaijan. On this occasion, students of the prominent scientist,  followers of Jalal Aliyev’s school visited his grave in the Alley of Honor, laid flowers and wreaths at his grave. Then an online event dedicated to the scientist’s memory was held at the Institute of Molecular Biology and Biotechnologies.

Opening the event, director of the Institute, vice-president of ANAS, academician Irada Huseynova said that academician Jalal Aliyev formed a school rich in fundamental research in Azerbaijan in the 70s of the last century, laying the foundation of new directions of biological science. The main direction of his scientific activity dedicated to the study of photosynthesis and photorespiration processes as the theoretical bases of productivity processes of agricultural plants. As a result of the complex implementation of the results of fundamental research in selection work, Jalal Aliyev created valuable high-yielding wheat varieties.

Then followers of Jalal Aliyev’s school- correspondent members of ANAS Ibrahim Azizov, Novruz Guliyev, Ilham Shahmuradov, Tarlan Mammadov, deputy director on scientific affairs, Ph.D. in biology, Associate Professor Alamdar Mammadov and deputy director on general affairs Natig Allahverdiyev, doctors of biological sciences Shahniyar Bayramov, Tofig Allahverdiyev, PhDs in biology Nurmammad Mustafayev, Sadagat Asadova, Gulnara Balakishiyeva, and others spoke about the rich and productive activity of the scientist in the development of Azerbaijani science, his great contribution to the training of highly qualified personnel in our country, the high appreciation of the scientist's work by our state, emphasizing that the memory of their teachers will always live in their hearts.