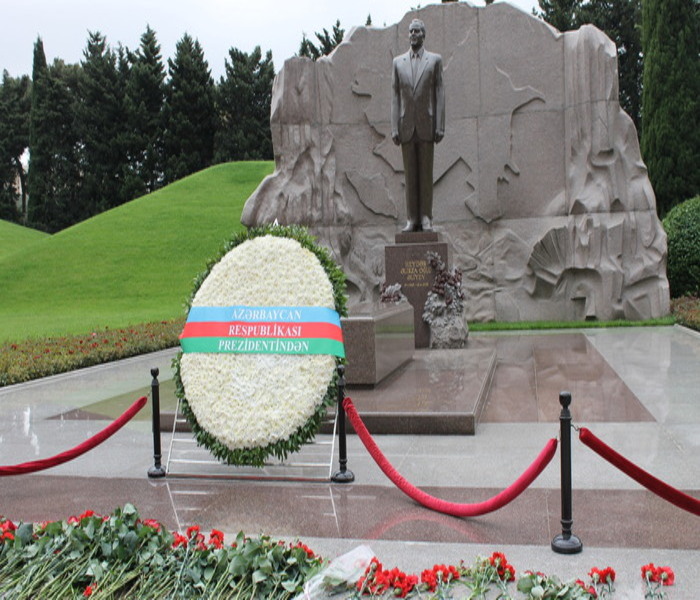 The memory of national leader Heydar Aliyev was commemorated at the Institute of Molecular Biology and Biotechnologies + Photo May 07, 2021 | 17:40 / Events

May 10 marks the 98th anniversary of the birth of Heydar Aliyev, a great person who devoted his entire life to serving his native Azerbaijan. The tomb of the savior of the Azerbaijani statehood, the eldest son of the Turkic world Heydar Aliyev has become a sacred shrine of our people, a place of oath for the youth. This year, as every year, our people remember the memory of the great leader with great respect. On May 7, members of the Council of Young Scientists and Specialists of the Institute of Molecular Biology and Biotechnologies of ANAS and YAP Sabail Sunbul Territorial First Party Organization visited the Alley of Honor on the occasion of the 98th anniversary of National Leader Heydar Aliyev, and they laid flowers in front of his grave.

Then the event continued in an online format at the institute. Opening the event,  correspondent member of ANAS Ibrahim Azizov spoke about the situation in Azerbaijan in 1992-1993. Ibrahim Azizov, one of the 91 prominent intellectuals who saw the country's salvation only in the great leader Heydar Aliyev in 1992 and signed an appeal for his return to power in Azerbaijan, stressed that Heydar Aliyev's coming to power saved the Azerbaijani statehood during that difficult period of Armenian occupation and internal strife.

Chairman of the Women's Council of the institute, doctor of philosophy in biology Fazila Gasimova noted that National Leader Heydar Aliyev is a person who engraved his word in golden letters in the history of Azerbaijan's independence with his policy. The great leader was a perfect head of state who always upheld the national interests of the Azerbaijani state and led his people to a bright future. The genius of Heydar Aliyev is such a peak that our past, present, and future are with him.

Then Natig Mammadov, deputy chairman of the YAP Sabail Sunbul Territorial First Party Organization for Youth Affairs, Nargiz Bayramova, chairman of the Council of Young Scientists and Specialists, Aygun Sadigova, Sabina Omarova, junior researcher of Laboratory of the Plant Biotechnology Gunay Ismayilova made a speech on this day

Speaking about the work done by Heydar Aliyev for the development of science in Azerbaijan, the young people recalled his great role in the creation of new fields of science and promised to faithfully serve the spiritual heritage of Heydar Aliyev. Heydar Aliyev, who wrote the history of eternal independence, has always lived, lives, and will live in the hearts of his people.