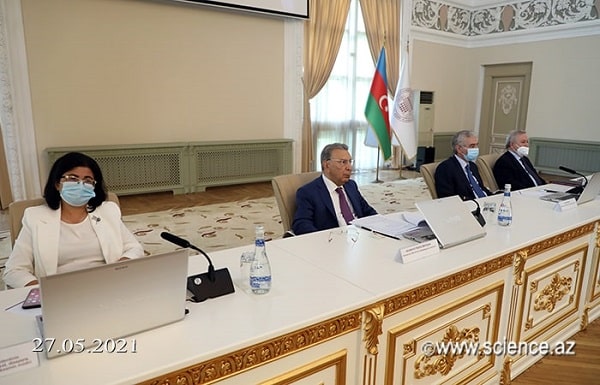 The General meeting of the National Academy of Sciences of Azerbaijan was held + Photo May 28, 2021 | 12:35 / Conferences, assemblies

The event was attended by the leadership of ANAS, Head of the Department for Humanitarian Policy, Diaspora, Multiculturalism and Religion of the Presidential Administration Farah Aliyeva, Deputy Prime Minister Ali Ahmadov, Minister of Transport, Communications and High Technologies Rashad Nabiyev, Deputy Minister of Foreign Affairs, Rector of ADA University Hafiz Pashayev, Chairman of the Higher Attestation Commission under the President of the Republic of Azerbaijan Famil Mustafayev, Chairman of the Board of Directors of the State Examination Center Maleika Abbaszadeh, full members of the Academy and other government officials, and corresponding members of ANAS-online.

Speaking at the meeting, ANAS President, Academician Ramiz Mehdiyev welcomed the participants of the event and drew attention to the issues on the agenda of the General Meeting.

Then a minute of silence was held in memory of the outstanding scientists who passed away last year and made a special contribution to the development of Azerbaijani science.

Then the memory of the outstanding scientists who passed away last year and who made a special contribution to the development of Azerbaijani science was honored with a minute of silence.

First, Academician Ramiz Mehdiyev spoke about the historic victory in the 44-day Patriotic War. He said that last year, under the resolute leadership of the Supreme Commander-in-Chief, Mr. Ilham Aliyev, the Azerbaijani army showed exceptional courage, liberated the Karabakh lands, which had been under occupation for about 30 years, and wrote another glorious page in the history of our independence.

Then, the head of ANAS noted that, despite the negative consequences of the COVID-19 pandemic, the Academy continuously continues the process of reforms, improving the management system and organization of science, building it in accordance with the challenges of our time.

The head of ANAS noted that cardinal structural changes were carried out in the office of the Presidium in order to clarify the boundaries of administrative management of scientific activities and improve management. “Today, serious changes are taking place in the world of science. We should know once and for all that science is the basis of economic, social and cultural development”, said Academician R. Mehdiyev, noting that the main task of ANAS is the development of science in the republic. He noted that the research conducted by our scientists must meet the requirements of world science and the objectives of the state policy pursued by President Ilham Aliyev.

At the end of his speech, the President of ANAS said that our scientists, especially the directors of institutes, should closely follow the changing agenda and be guided by innovations in their activities, and said that there is no other way to integrate into the world of science: “In this sense, special attention should be paid to the issues of political science, ideology, and Azerbaijanism. The Academy should play the role of the locomotive of this work in our society. The development of the historical, legal, political and socio-economic foundations of the ideology of Azerbaijanism should be one of our main tasks”.

Then the First Vice-President of ANAS, Academician Dilgam Tagiyev presented a report on the activities of ANAS in 2020 at the General meeting. He noted that in the reporting year, ANAS carried out 1,618 research works on 157 scientific problems and 540 topics, and implemented 81 grant projects.

The First Vice-President noted that in the reporting year, 21 meetings of the Presidium of ANAS were held, at which a number of important decisions were made related to improving the efficiency of scientific institutions, scientific and organizational, structural and personnel issues, and improving regulatory documents.

At the event, the vice-president of ANAS, academician Isa Habibbayli spoke on the issue of making additions and changes to the Charter of ANAS.

Then, Minister of communications and high technologies of the Republic of Azerbaijan Rashad Nabiyev, chairman of the Supreme Attestation Commission under the president of the Republic of Azerbaijan Famil Mustafayev, rector of Baku State University Elchin Babayev, academicians Arif Hashimov, Vaqif Farzaliyev, Govhar Bakhshaliyeva, Fakhraddin Gadirov, Abel Maharramov and Corresponding Member of ANAS Shahbaz Muradov highly appreciated the report on the scientific and scientific-organizational.

Then, the issue of making changes in the structure of the Charter Commission of ANAS was discussed. Academician Isa Habibbayli was re-elected chairman of the commission. The new composition of the commission has been approved: Academician Telman Aliyev, academician Ismayil Hajiyev, head of the Laboratory of the Institute of Physics, academician Nazim Mammadov, director of the Institute of polymer materials, corresponding member of ANAS Bakhtiyar Mammadov, Chairman of the Free Trade Union of ANAS, doctor of law, professor Habil Gurbanov, director of the Institute of Physiology, doctor of biological sciences, professor Ulduz Hashimova, Deputy Director of the Institute of Law and Human Rights of ANAS, Doctor of Law Nazim Jafarli, Head of the Secretariat of the President of ANAS, Doctor of Philosophy in Political Sciences, Associate Professor Eldar Amirov, Head of the Legal Department of the Presidium of ANAS Kamal Aliyev, with Department of Public Relations and information of the Presidium of ANAS, doctor of philosophy in philology Agahuseyn Shukurov.

Then elections were held for the membership of the Presidium of ANAS. A 5-member counting commission chaired by Academician Vagif Farzaliyev has been established. The new composition of the Presidium was determined in the elections held by secret ballot and attended by 46 members.

President of ANAS, academician Ramiz Mehdiyev spoke about the new and important tasks facing the Academy.