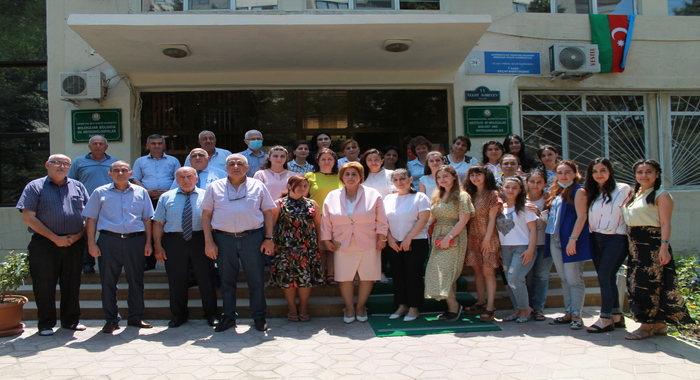 On July 1, an event dedicated to the 5th anniversary of the establishment of the Institute of Molecular Biology and Biotechnologies was held. The Director of the IMBB, vice president of ANAS, academician Irada Huseynova opened the meeting and welcomed the employees. Speaking about the rich scientific heritage of academician Jalal Aliyev, I.Huseynova noted that the current achievements of the institute are due to his foresight. Jalal Aliyev was a prominent socio-political figure and a great scientist. Academician Jalal Aliyev, who devoted his entire life to the development of  Azerbaijani science, paid special attention to the involvement of talented young people in science, their gaining experience in the leading research institutes of the Soviet Union. Irada Huseynova noted that the number of researchers working at the institute has increased over the past five years, and a scientific council and dissertation council have been established. There is an education department at the institute, master's and doctoral education is successfully implemented, as well as five international laboratories, the Department of International and Public Relations. The 4th issue of the transaction of the institute has already been published. Both print (print ISSN 2709-0744) and online electronic (E-ISSN 2709-0752) international standard serial numbers (ISSN) were purchased for the magazine. The journal is included in the "List of periodicals recommended for publication of the main results of dissertations in the Republic of Azerbaijan" of the Supreme Attestation Commission under the President of the Republic of Azerbaijan.

The event continued with the speeches of the students of Jalal Aliyev school- correspondent members of ANAS Ibrahim Azizov, Novruz Guliyev, deputy director for scientific affairs Alamdar Mammadov, doctors of sciences Saftar Suleymanov, Sayyara Ibadullayeva, Head of Education Department Ph.D. Samira Rustamova, leading research fellow Gulnara Balakishiyeva. Emphasizing the exceptional role of academician Jalal Aliyev in the formation of their scientific careers, the employees stressed that even in the most difficult periods of the academician's life he thought only about science, and the current success of the institute is connected with his name.

Representative of the Azerbaijan Representation of the International Academy of Turkic World Studies in Ankara, Turkey, doctor of technical and philological sciences, professor Elchin Isgenderzadeh took part in the event, and he congratulated the staff of the institute on the occasion of the 5th anniversary of IMBB. He presented a diploma and a Gold Star Medal to academician Irada Huseynova on the occasion of her election as an active member of the International Academy of Turkic World Studies for her great contribution to the development of Azerbaijani science.

Then, the leading research fellow of the Laboratory of Plant Biotechnology Mahira Mammadova was awarded Honorary Decree of the institute for her 60th anniversary and productive scientific activity.

At the end of the seminar, the film "Eternal Lamp" about the life and scientific activity of the prominent scientist was shown.