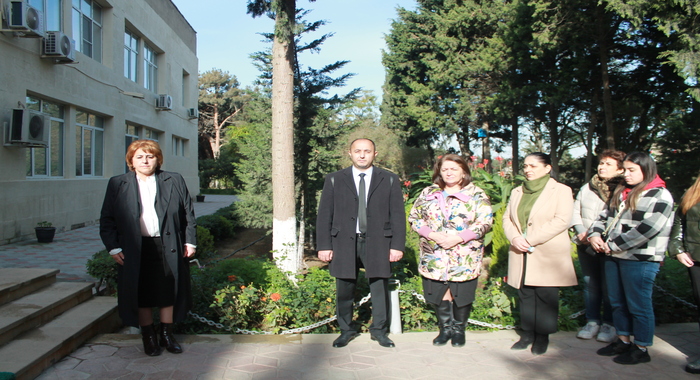 An event dedicated to "November 8 - Victory Day" was held at the Institute of Molecular Biology and Biotechnologies of ANAS. First, the participants honored the memory of the martyrs of the Great Patriotic War with a minute of silence. Opening the event, the director of the institute, vice-president of ANAS, academician Irada Huseynova spoke about the strength of the brave Azerbaijani Army, the heroism of our martyrs and veterans during the war, noting that our victorious army under the leadership of Supreme Commander-in-Chief Ilham Aliyev liberated our lands from the enemy. The Patriotic War, which began on September 27, lasted for 44 days and resulted in the liberation of our occupied territories, has become the brightest page of our history, a source of pride of the Azerbaijani people. Today, the mighty people of Azerbaijan, who fought for their rights from the beginning to the end with dignity and confidence, and who won this war, celebrate their great victory. We have never forgotten and will never forget our martyrs and their families! We all owe them this victory. We bow before their souls for sacrificing their lives for the Motherland and returning our native lands to us and giving us this joy and wish patience to their relatives. We wish God's mercy to all our martyrs and health to our veterans.

Then the correspondent members of ANAS - Ilham Shahmuradov, originally from Gubadli, Novruz Guliyev, originally from Jabrayil, chairman of the Veterans Council Ibrahim Azizov, father of a veteran Mikayil Pashayev, veteran of the First Karabakh War Shahvalad Mammadov, deputy chairman of YAP "Sunbul" Territorial First Party Organization for Youth Affairs Natig Mammadov, Chairman of the Council of Young Scientists and Specialists Nargiz Bayramova thanked the Supreme Commander-in-Chief Ilham Aliyev and the Victorious Azerbaijani Army for giving us the joy of this great victory, for putting an end to many years of longing for land.

A video reflecting the battle path of our heroic sons in the 44-day Patriotic War was shown at the event. The event was followed by a tree-planting campaign.