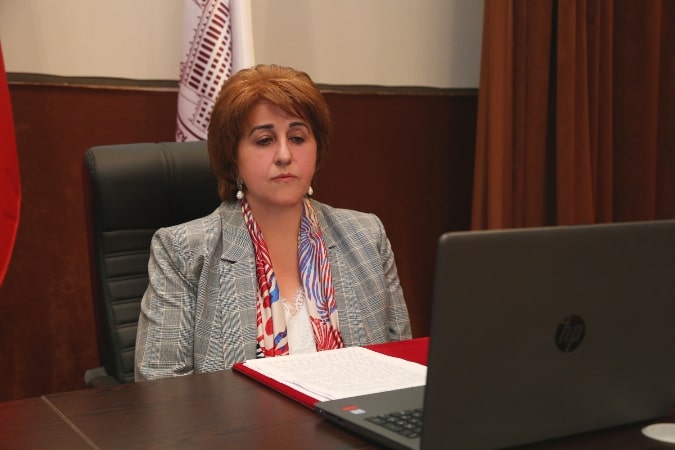 Academician Irada Huseynova: "The Azerbaijan National Academy of Sciences is actively involved in the great return of science to Karabakh and the process of restoration" Nov 08, 2021 | 15:35 / Important events

Vice-President of the Azerbaijan National Academy of Sciences, Director General of the Institute of Molecular Biology and Biotechnologies Academician Irada Huseynova spoke at the opening ceremony of the II International Karabakh Congress of Applied Sciences, dedicated to the Victory Day and the memory of the martyrs.

Academician I. Huseynova, noting the historical significance of the Victory, stated that the 44-day war, written in golden letters in the chronicle of the eternal heroism of the state and people of Azerbaijan and its logical conclusion - Victory Day, is the salvation of our independent statehood, territorial integrity, and national identity.

The Vice President noted that the determination of the President of Azerbaijan, Supreme Commander-in-Chief Ilham Aliyev, who successfully continued and developed the political, economic, and military policies of the great leader Heydar Aliyev, rallied the nation like an iron fist for a common cause, questioning the existence of a vassal formation called Armenia as an independent state.

The academician emphasized that in the occupied Karabakh, for almost 30 years, the Armenians plundered biodiversity, underground and ground resources, forests, pastures, land, and water resources in violation of the norms and principles of international law and universal values. In forests dominated by valuable trees, including the only unique plane tree forest in Europe, the most ancient plane trees, which are hundreds and thousands of years old, were cut down and destroyed by the Armenians. Dozens of species of plants and animals included in the "Red Book" of Azerbaijan are under threat of extinction.

Noting that during the occupation it was impossible to conduct any research in these areas, I. Huseynova added that Azerbaijani scientists were ready to contribute to the Great Return and Great Renaissance during the war and immediately after the Victory.

“Today underground and terrestrial, living and inanimate, natural and cultural resources of Karabakh, the current biological and ecological situation, prospects for future development have become the subject of serious interdisciplinary research,” the academician added. Further, I. Huseynova said that the "Action Program of ANAS on research work, scientific restoration and construction projects to be carried out in the liberated territories of Azerbaijan" and "Research work in the liberated territories of Azerbaijan" are being implemented.

According to the academician, the congress on "Biodiversity, land and water resources of Karabakh: past, present and future" held at ANAS on May 20-21, 2021 became an important event in terms of uniting scientists and specialists working in this field, and a guide for related activities. The speaker noted that a special issue of the journal "Life Sciences and Biomedicine" of ANAS, which will be published in English in the coming days, is devoted to the study of biodiversity, land and water resources of Karabakh.

During the seminar "Restoration of the infrastructure of the Karabakh research base of the Institute of Genetic Resources of the National Academy of Sciences of Azerbaijan, the organization of seed production of wheat and barley varieties created for the region", dedicated to Victory Day in the Shikharh village of the Terter region on October 22, she stressed that planting in the liberated and demined territories of the base - a serious step towards the resumption of agricultural research in the region. The academician added that our scientists have done a lot of work on radioecological and microbiological studies of the region's water resources: “I am sure that all the planned work will be fully completed. Azerbaijan and its integral part - Karabakh will continue to develop, and every day of our new history will be Victory Day ".

In conclusion, Academician I. Huseynova expressed her confidence that important scientific achievements will be demonstrated at the II International Karabakh Congress of Applied Sciences, the purpose of which is to promote the development of multidisciplinary research in the field of applied sciences, exchange important results and views, as well as the creation of an international scientific platform to improve the quality of research. She congratulated everyone on this great event and wished the conference success.