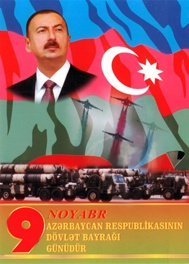 Our tricolor flag, one of the official symbols of the Republic of Azerbaijan, was approved on November 9, 1918, by the Council of Ministers of the Azerbaijan Democratic Republic, the first democratic republic in the Muslim East. "The flag once raised will never fall!" became the motto of the independence movement in Azerbaijan. This slogan is a symbol of respect for the flag, the motto of the liberation movement, which we remember from Mohammad Amin Rasulzade. On October 18, 1991, by the Constitutional Act "On the State Independence of the Republic of Azerbaijan", the Republic of Azerbaijan, as the successor of the Azerbaijan Democratic Republic, restored its state symbols, including the state flag. Our people united like a fist around the victorious Supreme Commander-in-Chief Ilham Aliyev today mobilized so that the Azerbaijani flag, which rises in the most prestigious seats of the world, will never fall. Thanks to the zeal of the Azerbaijani soldier who carried the flag with him on the way to the struggle for the freedom of our lands, and who said "If I am a martyr, wrap me in this flag", this flag is proudly flying in Karabakh, where we have longed for 30 years. Every Azerbaijani is proud to see our sacred flag waving on the highest peaks of Karabakh, especially in Shusha, where our heroes, who love their homeland more than their lives, fought for every inch of our land. We congratulate our people on Flag Day and wish our flag to always fly high.