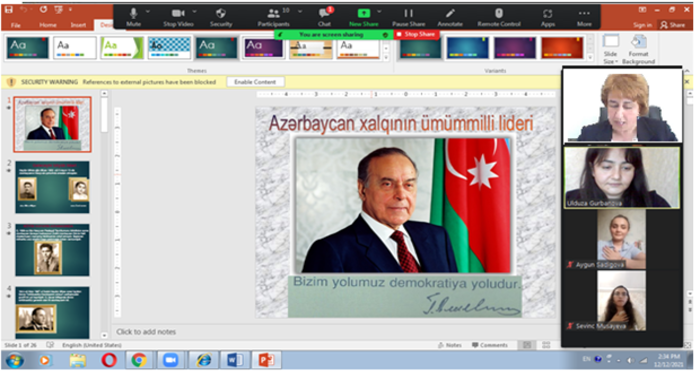 On December 12, 2021, an online event dedicated to the memory of National Leader Heydar Aliyev, jointly organized by the Institute of Molecular Biology and Biotechnologies, and Council of Young Scientists and Specialists (CYSS), was held.

First, the memory of the Great Leader was commemorated with a minute of silence. Opening the event, Director General of the Institute Academician Irada Huseynova reminded us that 18 years have passed since the death of the architect and founder of the independent Azerbaijani state, world-famous political figure, eldest son of the Turkic world, National Leader Heydar Aliyev, and she said that Heydar Aliyev, who was distinguished by his ability and great talent, had become a living legend during his lifetime. Academician Irada Huseynova added that the National Leader with his practical activity created a valuable history not only for Azerbaijan but also for humanity.

At the event, the chairman of the NAP Territorial Organization of ANAS, leading researcher of the Institute of Molecular Biology and Biotechnology, Doctor of Philosophy in Biology Ulduza Gurbanova noted that the name of the great leader became a symbol of the Azerbaijani people, his life became a criterion of love and loyalty to the native land. She said that the great leader was a leader who put the national interests of the Azerbaijani people and state above all else, who was able to mobilize them for common goals, and who ensured the rule of law in society.

Nargiz Bayramova, Chairman of the Council of Young Scientists and Specialists of the Institute, spoke about the historical work done by Heydar Aliyev for the development of Azerbaijan, including science, and the love of the people for the Great Leader.

The event was also attended by other employees of the Council of Young Scientists and Specialists of the Institute of Molecular Biology and Biotechnologies.

At the end of the event, a film dedicated to the memory of the Great Leader was demonstrated.