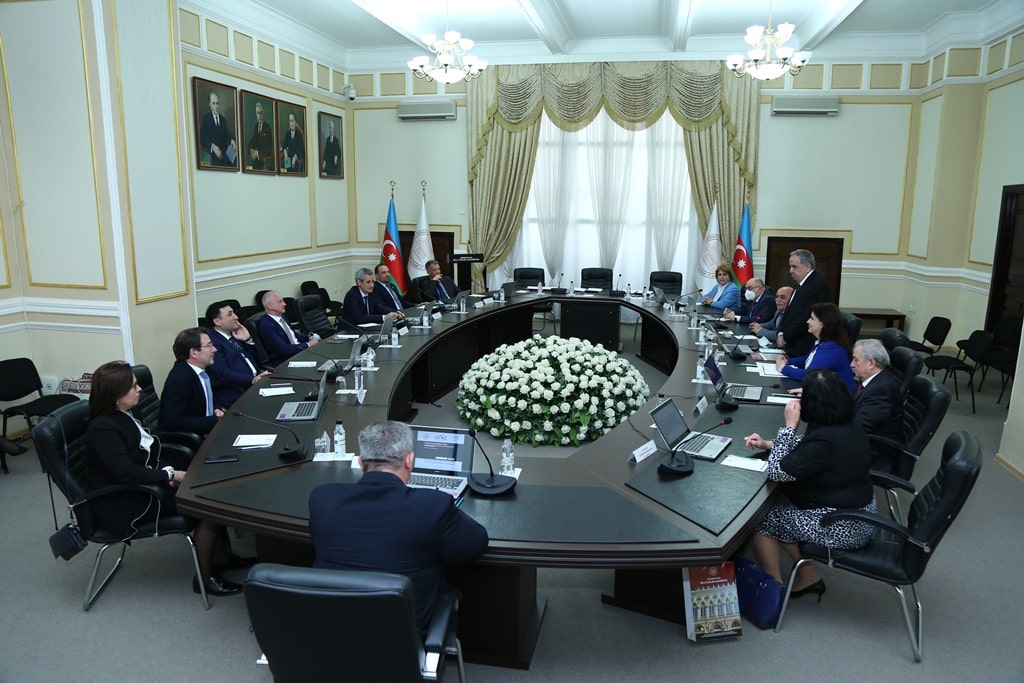 On April 21, 2022, the Azerbaijan National Academy of Sciences (ANAS), Azerbaijan State Oil and Industry University (ASOIU) and the University of Strasbourg (UNISTRA) signed cooperation agreement in science and education in the Presidium of ANAS.

Acting President of ANAS, Academician Arif Hashimov welcomed the guests and informed them about the history of the Academy and its achievements.

ANAS Acting President highlighted that the agreement will give impetus to the expansion of relations between the parties, the implementation of joint scientific projects and research, as well as the training of young professionals.

UFAZ Director Vazeh Asgarov thanked the leadership of ANAS for the organization of the event and introduced the French guests.

ASOIU Rector, Doctor of Technical Sciences, Professor Mustafa Babanli provided comprehensive information about UFAZ. He informed that the university announced its first admission in 2016 and had its first and second graduates in 2019 and 2020 respectively. In 2020 UFAZ announced the admission to its first master's degree programs. He added that UFAZ would train students for doctoral degrees as well, and mentioned that agreement has already been signed between ASOIU and the University of Strasbourg.

Professor Mustafa Babanli underlined the need for the expertise of ANAS and Azerbaijani scientists as UFAZ has recently started UFAZ to implement scientific research, as well as the significance of joint research in regard to the interests of our country and modern challenges which  will in its turn give impetus to the development of our republic and science in general. At the same time, he noted that the tripartite agreement will create a bridge between the Azerbaijani and French scientific centers.

President of the University of Strasbourg Michel Deneken noted that Unistra is one of the most established universities in Europe. Michel Deneken mentioned 5 Nobel laureates and about 30 French academics who work at the University of Strasbourg and that success of UFAZ in recent years has attracted the interest of these specialists and they are ready to contribute to this process.

Recalling that he attended a meeting with First Lady of Azerbaijan, President of the Heydar Aliyev Foundation Mehriban Aliyeva in 2017, Michel Deneken noted that he was inspired by the meeting on creation and development of a new education system in Azerbaijan, as well as establishing scientifict laboratories that meet the standards of modern world and conducting future research.

In turn, academician Arif Hashimov thanked for the invitation and mentioned the General Meeting of ANAS to be held on April 27 where an exhibition of scientific achievements of the Academy will be organized as part of the event and he invited guests to visit the exhibition.

The French Ambassador to Azerbaijan Zacharie Gross stressed the importance of the agreement and underlined that the embassy was also interested in it. He noted that the document will play an important role in conducting joint scientific work, holding intellectual interactive meetings and creating a research environment. He also noted that the UFAZ fund has been established recently and joint projects can be implemented with the financial support of this fund.

Vice-presidents of ANAS, academicians Dilgam Tagiyev, Rasim Alguliyev, Irada Huseynova and Govhar Bakhshaliyeva also spoke at the event and added that the agreement will be an intellectual bridge between the two countries and will play an important role in the integration between science and education, as well as training.

Later, an agreement on cooperation in science and education was signed between ANAS, ASOIU and the University of Strasbourg. The agreement was signed by academician Arif Hashimov from ANAS, professor Mustafa Babanli from ASOIU and President Michel Deneken from Strasbourg University.

The parties agreed on to support education, scientific and technical development, research and exploration in the fields of earth and environmental sciences, oil, gas and other energy sources, chemistry and chemical engineering, materials science, computer science, information technology and artificial intelligence, organize seminars, joint symposiums, and conferences, support the participation of bachelors, masters, doctoral students and young researchers in joint scientific projects and activities, create joint programs for training of scientific staff and students of ANAS, ASOIU and UFAZ, and to create conditions for bachelor, master and doctoral students to use scientific equipment, laboratories for joint research, etc.