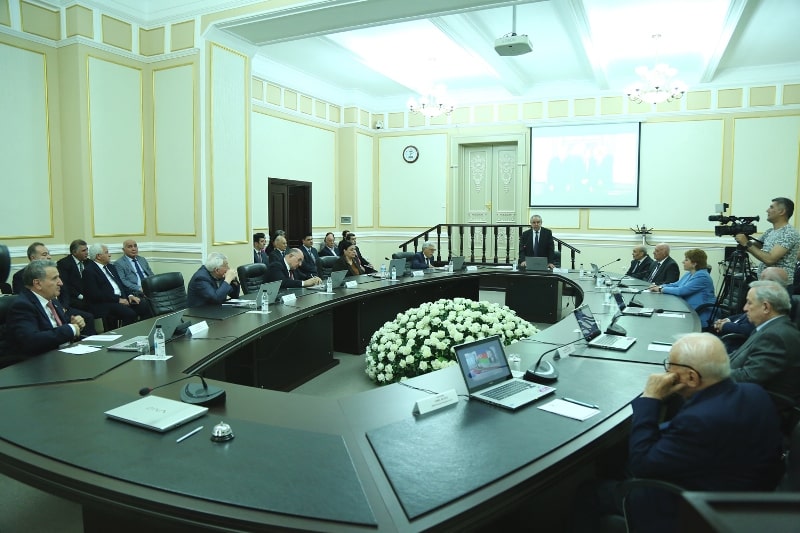 A conference on the topic “Heydar Aliyev: Teaching statehood and the modern period” was held at ANAS + Photo May 07, 2022 | 13:00 / Conferences, assemblies

On May 6, the Presidium of ANAS held a conference on “Heydar Aliyev: statehood training and modern era” dedicated to the 99th anniversary of the national leader Heydar Aliyev.

Firstly, the memory of national leader Heydar Aliyev and martyrs who sacrificed their lives for the territorial integrity of Azerbaijan was commemorated with a minute of silence.

Opening the event, Acting President of ANAS, academician Arif Hashimov spoke about the historical services of the great leader Heydar Aliyev, the architect and founder of our independent state, the great leader in the field of scientific, political, economic and cultural construction, as well as his role in the current activities of ANAS. He said that thanks to the wise policy and historical foresight of the national leader Heydar Aliyev, the idea of national statehood, as well as the establishment of the modern state of Azerbaijan and the realization of our people's independence were achieved.

Academician Arif Hashimov brought to the attention that the world-famous politician Heydar Aliyev paid great attention and care to the development of science in our country, including ANAS during his leadership in Azerbaijan. After the great leader came to power for the second time, the threat of closure of the Academy was eliminated and a new stage of development of Azerbaijani science began.

He stressed that as a result of the successful internal and foreign policy of great leader Heydar Aliyev on the rising line by President Ilham Aliyev, Azerbaijan achieved important historical achievements and the historic victory in the 44-day Patriotic War was the triumph of Heydar Aliyev's policy.

Then vice-president of ANAS, academician Isa Habibbeyli made a report on “On the ways of independence: from Heydar Aliyev to Ilham Aliyev”.

Academician Isa Habibbayli spoke about the merits of national leader Heydar Aliyev towards our independence. He noted that genius person Heydar Aliyev paid great attention to training of highly qualified personnel in military sphere in the years of leadership of Azerbaijan in USSR period and supported opening of Military Lyceum named after Jamshid Nakhchivanski. According to him, the Great Leader achieved the inclusion of the Azerbaijani language as the state language in the Constitution of 1978 and laid great foundations for the state independence of Azerbaijan.

“As a result of the services of national leader Heydar Aliyev to our people, the ideas of azerbaijanism were formed in our country even during the Soviet period”, said the vice-president, adding that for this reason Azerbaijan was one step ahead in terms of determining the national ideology after gaining independence compared with other countries of the former USSR: “The great leader Heydar Aliyev is the founder of the independent state of Azerbaijan, as well as the founder of the Azerbaijani state ideology.”

Academician Isa Habibbayli noted that all the political, ideological, military and economic processes necessary for Azerbaijan in the first years of independence were resolutely, consistently and purposefully carried out by great leader Heydar Aliyev at the highest level. The establishment of the basis of political sovereignty of Azerbaijan by the great personality, the approval of the Constitution of the independent state are important steps taken to strengthen the political independence of our country.

He also spoke about the importance of the “Contract of the century” signed in 1994, which is one of the important projects implemented in the direction of ensuring economic sovereignty and emphasized its importance as an international treaty, as well as a manifesto of Azerbaijan's independence. İsa Habibbayli said that the countries of the world recognize the independence of Azerbaijan in the light of this agreement.

The vice-president emphasized the adoption of the tricolor flag as the state flag of the Nakhchivan Autonomous Republic on the initiative of national leader Heydar Aliyev at the Nakhchivan Supreme Soviet session on November 17,1990, as one of the important works done to restore the statehood of independent Azerbaijan. He said that as a result of the tireless activity of the Great Leader, the implementation of land reforms, army building, transition to the market economy, the formation of the private sector in our country are among the important steps calculated on economic independence.

Academician Isa Habibbayli added that the genius person Heydar Aliyev as the founder and executor of the foreign policy concept of Azerbaijan gained a large number of partners and achieved recognition of Azerbaijan as an independent state as a result of his relations with various countries of the world. Noting the merits of national leader Heydar Aliyev as a bright representative of historical succession, he emphasized that President Ilham Aliyev's coming to political power and his election as head of state are a continuation of this historical succession. The speaker noted that President Ilham Aliyev further enriched the path of the Great Leader, deservedly represented this way and turned our country into one of the most revered countries in the world.

Vice-president of ANAS said that as a result of purposeful reforms, President Ilham Aliyev successfully applies the policy of tolerance and multiculturalism based on the principle of diversified economy, multi-aspect development in our country and makes a great contribution to the formation of political solidarity in Azerbaijan.

“One of the most important services of the great leader was to introduce Karabakh to the world as the land of Azerbaijan,” academician Isa Habibbayli said and emphasized that national leader Heydar Aliyev successfully coped with this task. He added that the worthy successor of the great leader, Ilham Aliyev, once again confirmed that Karabakh is the historical land of Azerbaijan with a great victory.

Then the Secretary-General of the Parliamentary Assembly of the Black Sea Economic Cooperation (PABSEC), academician Asaf Hajiyev made a report on the theme “A word about the National Leader”. He said great personality Heydar Aliyev was known all over the world as a head of state, leading political leader and diplomat with his farsightedness, determination and courage, broad outlook.

The speaker noted that due to the initiative, hard work and foresight of the outstanding statesman Heydar Aliyev, a historic step was taken at the cost of great suffering and the Military Lyceum named after Jamshid Nakhchivanski was established during the USSR. He stressed that soldiers and officers trained by the military school founded 50 years ago had a historical victory for our people in the 44-day Patriotic War.

“The great statesman, who has made an exceptional contribution to the protection of our national and moral values and the development of our culture, has always been proud of his national identity and recommended to future generations the preservation of our centuries-old culture and moral values. Currently, the policy of the great leader pursued by President Ilham Aliyev continues successfully. Today, each of us, as a citizen of Azerbaijan, always pays tribute to the great personality Heydar Aliyev with a sense of gratitude and we remember with deep respect,” academician Asaf Hajiyev added.

The event was also attended by the head of the Department of the Nizami Ganjavi Institute of Literature, Doctor of Philology Elnara Akimova “Heydar Aliyev and Azerbaijani Literature”, executive director of the Institute of Additive Chemistry, Doctor of Chemical Sciences Afsun Sujayev “The role of Heydar Aliyev in the development of the chemical industry in Azerbaijan”, leading researcher of the Institute of Radiation Problems (İRP), doctor Elchin Huseynov “Science of Azerbaijan: from Heydar Aliyev to Ilham Aliyev”, etc. The head of the department of the Higher Attestation Commission under the President, a leading researcher of the İRP, Doctor of Physical Sciences Sakin Jabarov made reports on the topic “Heydar Aliyev and the Azerbaijani army” and spoke about the successful policy pursued by the great leader in the relevant fields and achievements.

In conclusion, ANAS Vice-President, academician Dilgam Taghiyev and ANAS advisor, academician Yagub Mahmudov spoke about the multifaceted activities of the great man Heydar Aliyev before the Azerbaijani people and state and shared memories of the great leader. He emphasized that national leader Heydar Aliyev devoted his whole life to the welfare of Azerbaijan, worked for the development of Azerbaijan during his social and political activity, and did everything for our nation and people. Today, the political course of the Great Leader is successfully continued by the President of the country Mr. Ilham Aliyev in the light of new realities.