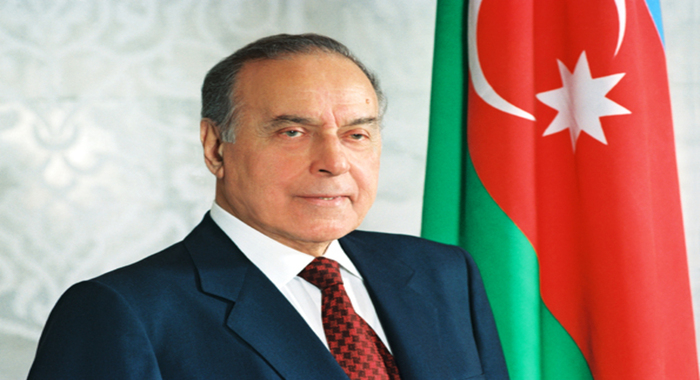 An event dedicated to the 99th anniversary of National Leader Heydar Aliyev was held at the Institute of Molecular Biology and Biotechnologies of ANAS + Photo May 10, 2022 | 12:42 / Events

Today an event dedicated to the 99th anniversary of National Leader Heydar Aliyev was held at the Institute of Molecular Biology and Biotechnologies of ANAS.  Along with the employees of IMBB, employees of the Central Botanical Garden also participated in the event. Participants of the event first commemorated the national leader with a minute of silence. Opening the event, Vice-President of ANAS, Director General of the Institute of Molecular Biology and Biotechnology, Academician Irada Huseynova spoke about the rich and multifaceted heritage of National Leader Heydar Aliyev, who gained immortality with his exceptional services. The academician noted that looking back over the past years, we are once again witnessing the important historical achievements of the Azerbaijani people under the leadership of their wise leader. The awakening of national consciousness began with the coming to power of Heydar Aliyev, and thanks to him, our independence became eternal and irreversible. Our country has risen to the level it deserves in the world thanks to the foresight, wisdom, determination, iron will, and rich experience of statehood of the Great Leader. Thanks to his unparalleled services to his homeland and people, today the 99th anniversary of the birth of national leader Heydar Aliyev is widely celebrated throughout the country and abroad with high respect and deep gratitude of every Azerbaijani. Heydar Aliyev created a new history in Azerbaijan's social, political, economic, cultural, and spiritual life in the twentieth century with his endless devotion, love, foresight, kindness, and thoughtful and hard work to his people and homeland. Great leader Heydar Aliyev wanted to see independent Azerbaijan happier and people more prosperous. Today, Ilham Aliyev is a worthy successor of the path of the President of independent Azerbaijan Heydar Aliyev. Thanks to Ilham Aliyev, who expressed the will of the Azerbaijani people, Heydar Aliyev's policy lives and wins in Azerbaijan. As a result of the decisive and purposeful activity of President Ilham Aliyev, the Victorious Army of Azerbaijan ended its 30-year occupation. The Armenian army was routed for 44 days and Operation “Iron Fist” ended with Azerbaijan's Glorious Victory. It is the measures taken by President Ilham Aliyev, who continued the policy of National Leader Heydar Aliyev in accordance with the requirements of the time, that ensured the growth of Azerbaijan's national strength and confident steps towards strategic goals and victory.

At the end of the event, a film dedicated to the life and work of National Leader Heydar Aliyev was demonstrated.