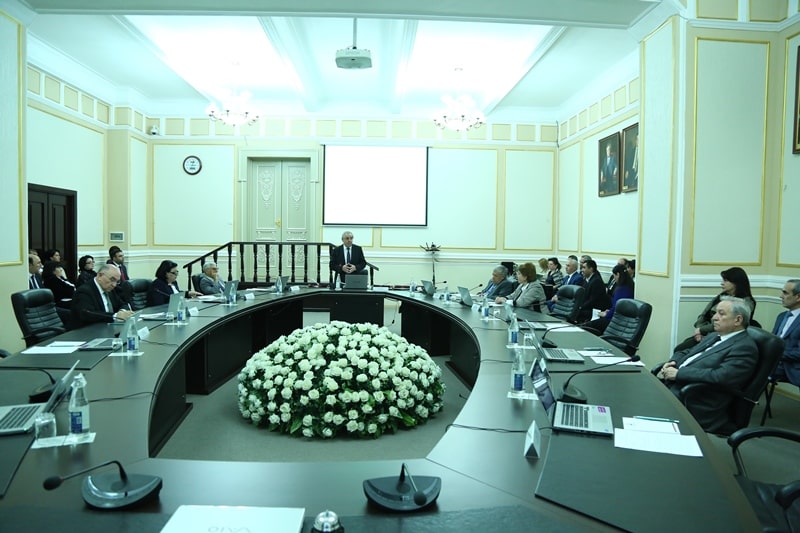 The next meeting of the Presidium of the Azerbaijan National Academy of Sciences was held on May 13.

Opening the meeting with an introductory speech, the Acting President of ANAS, academician Arif Hashimov informed about the agenda of the meeting.

At the meeting, vice-president of ANAS, academician Rasim Alguliev proposed to differentiate the scientific secretaries of the Presidium of ANAS by their work experience.

Academician Arif Hashimov gave instructions to the heads of the Financial and Legal Departments of the Presidium of ANAS to consider the above-mentioned proposal.

A number of scientific and organizational issues were also discussed at the event and a decision was made on the occasion of the 75th anniversary of the vice-president of ANAS, academician Ibrahim Guliyev.

The next issue discussed the results of the General Meeting of ANAS dated April 27, 2022 and the General Meetings of the scientific section as its continuation. Making a speech on the topic, academician Arif Hashimov brought to the attention that meetings with active and corresponding members of 6 scientific departments of ANAS were held in the last few days, existing problems were heard, as well as proposals on determining the future action plan and road map using the current potential of the Academy were adopted. He said that all the proposals voiced at the meetings with the members of the sections will be filtered and summarized on the basis of the participation of scientific secretaries of the sections and will be reflected in the draft decision of the General Meeting of ANAS dated April 27, 2022.

After discussions, the Presidium adopted a decision on the results of the General Meeting of ANAS dated April 27, 2022.

At the event, a commission was established to improve the structure and management of the Presidium of ANAS.

At the meeting, academician Irada Huseynova informed about the next field seminar to be held on May 20 in Shikharkh settlement of Tartar region, at the Garabagh Scientific Research Base organized by the Division of Biological and Medical Sciences and the Institute of Genetic Resources. She noted that the above-mentioned event is of particular importance in ensuring the food security of the Republic, creation and application of new varieties of cultivated plants, as well as in the restoration and development of agriculture in the areas liberated from occupation.

After discussions, it was decided to participate in the event of the members of the Presidium of ANAS.

Then, chairman of the working group of ANAS for participation in the “Teknofest Azerbaijan” festival, academician Rasim Alguliyev informed about the preparation for the participation of scientific institutions and organizations of the Academy at the exhibition to be held within the framework of the “Teknofest Azerbaijan” Aviation, Space and Technology festival to be held in Baku on May 26-29, 2022. Academician noted that, the festival opens wide opportunities for the authority of ANAS and regularly conducts reports and interviews by the Information Department of the Presidium of ANAS on preparatory work, as well as scientific achievements to be exhibited and broadcasts in the media. He noted that, other enterprises of the festival, as well as the pavilion allocated for ANAS, will be given to the participants on May 16-24 in order to prepare exhibitions.

Relevant instructions and recommendations were given at the meeting on the high-level participation of ANAS in the festival, as well as the decision was made to participate in the festival.

At the end, academician Arif Hashimov touched upon a number of issues and noted the importance of taking relevant steps in connection with the discussion of the names of the dissertation topics approved in the scientific councils of enterprises in the problem councils, as well as strengthening the Coordination of scientific research in the Republic.