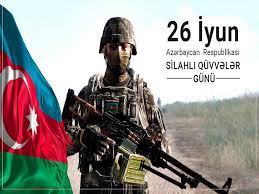 The intensification of the Armenian aggression in 1917-1918 put the Azerbaijani Turks in danger of physical destruction. Such a situation necessitated the immediate start of army building. By the decree dated June 26, 1918, the establishment of the Azerbaijan National Army began. On August 1, the Military Ministry of the ADR was established. On December 25, talented General Samad bey Mehmandarov was appointed Military Minister, Lieutenant General Alaga Shikhlinsky was appointed deputy minister. The Azerbaijani army had such talented generals as Huseynkhan Nakhchivanski, Ibrahim agha Usubov, Hamid Gaitabashi, Kazim Gajar, Javad bey Shikhlinsky, Habibbey Salimov. After the collapse of the ADR, the Bolshevik government abolished the National Army

Only the coming to power of Heydar Aliyev in 1993 and his election as President of the Republic of Azerbaijan gave a strong impetus to the implementation of essential measures in the field of army building in our republic. President, Supreme Commander-in-Chief Ilham Aliyev, who successfully continues Heydar Aliyev's policy in all spheres, has made a great contribution to the development of army building. Today, the military units of the Azerbaijani Army have been built in accordance with modern standards, the living conditions of personnel have been improved, and thanks to the important work done to provide our army with modern weapons, the Azerbaijani Armed Forces have taken their rightful place among the strongest armies in the world. The high fighting spirit, patriotism, and self-sacrifice formed by Ilham Aliyev in the Armed Forces of the Republic of Azerbaijan as the Supreme Commander-in-Chief manifested itself in all clarity in the 44-day Patriotic War. For two years now, the people of Azerbaijan have been proudly celebrating Army Day. Now the defense of our lands is in safe hands.

We congratulate the people of Azerbaijan on this significant day!