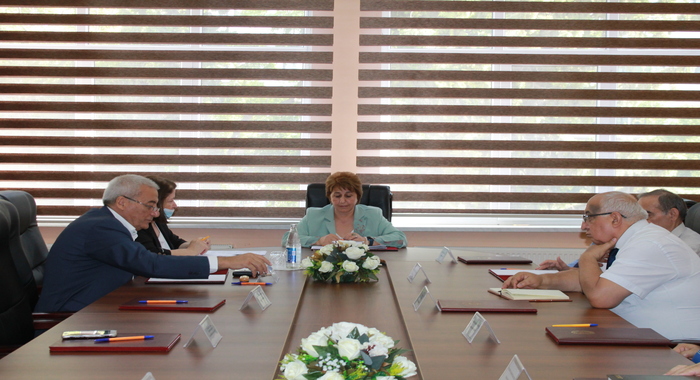 The regular meeting of the Scientific Council was held at the Institute of Molecular Biology and Biotechnologies + Photo Sep 13, 2022 | 12:49 / Conferences, assemblies

On September 13, the next meeting of the Scientific Council was held at the Institute of Molecular Biology and Biotechnologies of the Ministry of Science and Education. Firstly, the memory of the servicemen who died as a result of provocation, gross violations of international legal norms, the conditions of the tripartite Declaration signed between the leaders of Azerbaijan, Armenia, and Russia on November 10, 2020, and large-scale attacks on the Azerbaijan-Armenia state border in the directions of Dashkasan, Kalbajar, and Lachin in the night of September 12, by units of the Armenian armed forces on the night of September 12, was commemorated with a minute of silence. Opening the meeting, the chairman of the council, Vice-President of ANAS, and General Director of the Institute academician Irada Huseynova introduced the members of the Scientific Council to the issues on the agenda. At the meeting, the study plans for the 2022/2023 academic year for the master's degree at the Institute of Molecular Biology and Biotechnologies for the specialties of Molecular Biology, Biotechnology, Biochemistry, and Plant Physiology were discussed and adopted. Head of the Institute's Education Department, Ph.D. in Biology Samira Rustamova provided information about the students admitted to the Master's program of the Institute in the 2022/2024 academic year, as well as the Ph.D. candidates who were admitted to the Institute's doctoral study in the 2022 academic year. Employees of the institute returning from the international conference dedicated to the 90th anniversary of Academician Y.S. Nasirov held in Dushanbe, Republic of Tajikistan – doctor of biological sciences, Assoc. Prof. Shahniyar Bayramov, Ph.D., Assoc. Prof.Ulduza Gurbanova and young scientist Aynura Pashayeva spoke about their participation in the conference, senior researcher of the Bioadaptation Laboratory, who returned from a scientific trip from Ankara University of the Republic of Turkey, Ph.D. Samra Mirzayeva informed the council members about the research she performed there. Then the issue of sending the leading researcher of the Bioadaptation Laboratory of the Institute, Ph.D., Assoc. Prof. Nargiz Sultanova, a junior researcher at the Plant Biotechnology Laboratory Aygün Sadygova to Istanbul, and Sevinj Musayeva, a junior researcher at the Laboratory of Enzymology of Photosynthetic Carbon Assimilation, to Antalya, Turkey for a scientific trip, was discussed.

Also at the meeting, the issues on celebrating the 65th anniversary of the leading researcher of the laboratory of Photochemistry of Chloroplasts Ph.D., assoc. prof. Fazila Gasimova, events plan on September 27 - Memorial Day and other organizational issues were discussed and appropriate decisions were made.