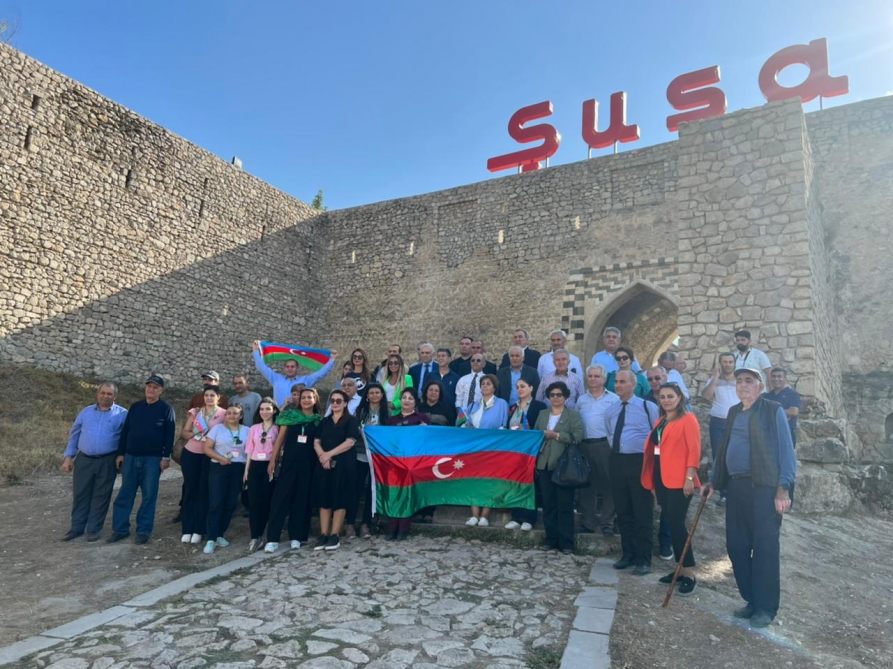 The closing ceremony of the international conference on "Biodiversity, land and water resources of Shusha and surrounding areas: a vision of the future" was held in Shusha + Photo Sep 24, 2022 | 21:00 / Important events

The closing ceremony of the international conference on "Biodiversity, soil and water resources of Shusha and its surrounding areas: a vision of the future" held at ANAS on September 22-23, 2022, took place today in Shusha, on the Jidir Duzu.

The closing ceremony was attended by representatives of institutes and organizations included in the divisions of Biological and Medical, Earth, as well as Physical-Mathematical and Technical Sciences.

First, the state anthem of the Republic of Azerbaijan was performed. Later, the dear memory of our martyrs, who died on the way to the motherland, was commemorated with a minute of silence.

Speaking at the closing ceremony, academician Irada Huseynova, vice-president of ANAS, expressed gratitude on behalf of the participants of the conference to the victorious Commander-in-Chief Ilham Aliyev and our glorious army for the liberation of Karabakh and the creation of opportunities for the re-exploration of these territories. She added that last year's and this year's conference dedicated to the research conducted in Karabakh was possible thanks to the determination of the President of the country and the power of our army.

According to academician Irada Huseynova, after the liberation of our lands from occupation, the Great Return of our compatriots and the "Great Return" of science also began.

The vice-president pointed out that one of the main tasks of our scientists is to deeply study the biodiversity of these lands and to provide scientific support for the reconstruction works carried out here. For this purpose, she spoke about the necessity of creating a revival in science.

Academician Irada Huseynova, emphasizing that countries with strong science and education are influential in the world today, noted that conducting scientific research at a more modern level and strengthening our science is one of the necessary issues: "We, the scientists of Azerbaijan, must also work to raise the reputation of our science and education, show our support for our country to have a voice in the international world in the field of science as well as other directions".

At the end of her speech, Academician Irada Huseynova wished to hold a grand conference dedicated to the 100th anniversary of the birth of National Leader Heydar Aliyev in Shusha next year, and wished success to the event participants in their future activities.

Then the general director of the Oil and Gas Institute, academician Fakhraddin Gadirov spoke about the importance of Azerbaijani scientists strengthening their research on the biodiversity, soil and water resources of Karabakh. He stated that there is a great need to conduct a large number of biological, ecological, and geological studies in our liberated territories, and touched on the need to accelerate work in this direction.

Academician Fakhraddin Gadirov informed about the progress of the conference and expressed his gratitude to ANAS, especially the Division of Biological and Medical Sciences, for organizing the event at a high level.

Chingiz Aliyev, head of the department of the Institute of Geology and Geophysics, corresponding member of ANAS, said that the event is important in terms of exchanging scientific ideas about the natural resources of Karabakh. The scientist said that ANAS specialists are closely involved in the radioecological monitoring of the territories freed from occupation, and pointed out that work is being done in the direction of drawing maps to improve the ecological condition of these territories.

Speaking about the importance of holding the conference, Professor Chingiz Aliyev noted that this event raised serious issues for Azerbaijani scientists and revealed the importance of conducting research to restore these areas.

The head of the department of Baku State University, correspondent member of ANAS Elshad Gurbanov said that our citizens from other regions of our republic brought animals to these areas rich in forests and summer pastures. The scientist said that Azerbaijani scientists have important tasks in this regard.

Professor Elshad Gurbanov expressed his gratitude to the organizers of the event for organizing the closing ceremony of such a prestigious conference in the city of Shusha.

At the end of the closing ceremony, it was decided to address the President of the country, Ilham Aliyev, on behalf of the conference participants, with an appeal reflecting the views of Azerbaijani scientists on the restoration of scientific research in the liberated territories.

After the event, the conference participants visited the mausoleum of Molla Panah Vagif, a prominent representative of Azerbaijani poetry in the city of Shusha, the fortress walls surrounding the historical center of the city - the Shusha fortress, as well as the statues of Uzeyir Hajibeyli, Bulbul and Natavan, which are called "Shot statues" and are located in the House Bulbul Museum.