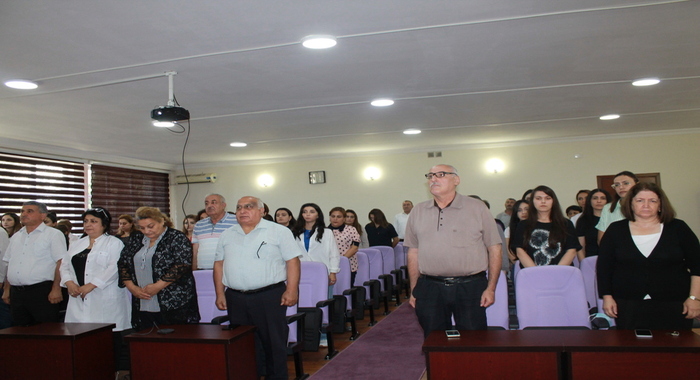 On September 27, Institute of Molecular Biology and Biotechnologies of MSE held a large event on the occasion of Remembrance Day with the participation of family members of martyrs and veterans.

First, the participants of the event commemorated the dear memory of the martyrs of the Patriotic War with a minute of silence. The director of the institute, vice-president of ANAS, academician Irada Huseynova, opened the event and she spoke about the importance of the Great Victory we won in the 44-day Patriotic War thanks to the power of our glorious Army under the leadership of the President of Azerbaijan, Commander-in-Chief Ilham Aliyev. She said that as a sign of deep respect for our soldiers and officers who sacrificed their lives for the territorial integrity of our country, and all our martyrs, by the Decree of the President of the Republic of Azerbaijan Ilham Aliyev dated December 2, 2020, September 27 is celebrated as Memorial Day in the Republic of Azerbaijan. Academician Irada Huseynova noted that the foundation of today's powerful army of Azerbaijan was laid by national leader Heydar Aliyev. Speaking about the historical significance of the closing ceremony of the international conference on "Biodiversity, land and water resources of Shusha and surrounding areas: a vision of the future" held in ANAS on September 22-23, 2022, in Shusha, on the Jidir Plain, she shared her impressions with the participants of the event when she visited the holy land of Shusha, the mausoleum of M.P. Vagif which were freed from the enemy by the bravery of the victorious Azerbaijan Army under the leadership of Commander-in-Chief Ilham Aliyev, and the blood of our martyrs. Then, a video reflecting the closing ceremony of the international conference held in Shusha with the participation of employees of ANAS was demonstrated.

Mothers of veterans - M. Khanishova, N. Abdullayeva, who spoke at the event, emphasized that their children are always taken care of by the state, and expressed their deep gratitude to the management and employees of the institute for their support, attention, and care during the difficult days of the war. M. Pashayev, one of the employees of the institute, remembered the days when his relatives participated in the war and noted that the people of Azerbaijan united as a fist around Mr. President and emerged from this test with honor and as a victorious nation. Participants of the First Karabakh War N. Mustafayev, Sh. Mammadov and B. Dashdamirov, brother of martyr F. Mammadov, Chairman of the Institute's Veterans Council, Corresponding Member of ANAS Ibrahim Azizov, Corresponding Member of ANAS Novruz Guliyev, Doctor of Biological Sciences Saftar Suleymanov and others speaking, they emphasized that this historic victory of the Azerbaijani people was won due to the coincidence of the will of the people, the strength of the army and the will of the leader.