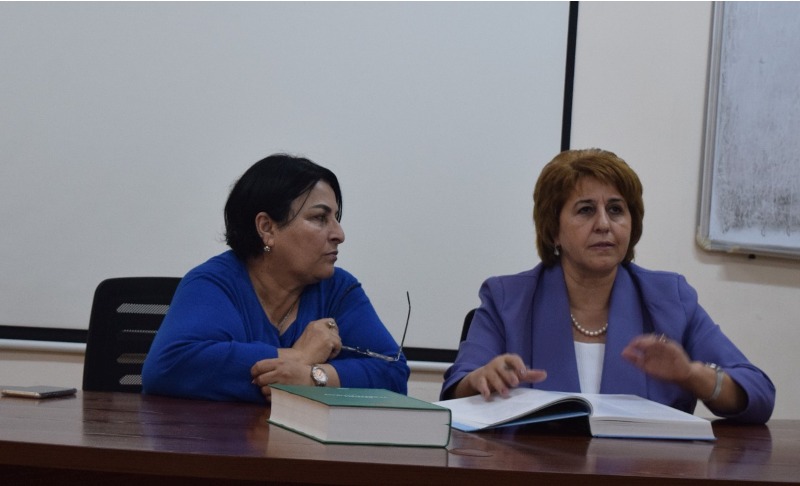 A meeting of the working group on botany was held in connection with the preparation of the third edition of the Red Book. + Photo Oct 28, 2022 | 10:20 / Conferences, assemblies

The next meeting of the working group of botanists for the preparation of the third edition of the "Red Book" of the Republic of Azerbaijan was held under the chairmanship of the vice-president of ANAS, academician Irada Huseynova.

Academician Irada Huseynova drew attention to the importance of accelerating the work related to the completion and writing of the III edition of the "Red Book" of the Republic of Azerbaijan, recalled the issues raised at the meeting of the editorial board and working groups of ANAS of the III edition, held a few days ago, also reported on the agreements reached at a meeting of the working group on zoology. The speaker noted that botanists should also discuss these agreements.

Then the General Director of the Institute of Botany, Doctor of Biology, Professor Sayyara Ibadullayeva spoke, who informed about the work done and planned, and also said that some issues regarding the third edition of the Red Book had been widely discussed with scientists working in the regions in recent days.

Then the Executive Director of the Institute, Doctor of Biology, Associate Professor Shakir Gasimov, Head of the Department, Doctor of Biology Aydin Askerov, Head of the Laboratory, Doctor of Philosophy in Biology Rashad Salimov, Leading Researcher, Doctor of Philosophy in Biology Elman Yusifov and others expressed their attitude to each the issue under discussion and made suggestions. There was general agreement on species profiles, distribution maps and reference formats, and evaluation criteria.

Concluding the event, academician Irada Huseynova noted that the working groups will be discussed with authorized persons of the Ministry of Ecology and Natural Resources for the speedy completion of work related to the Red Book, and gave recommendations and tasks in this direction.