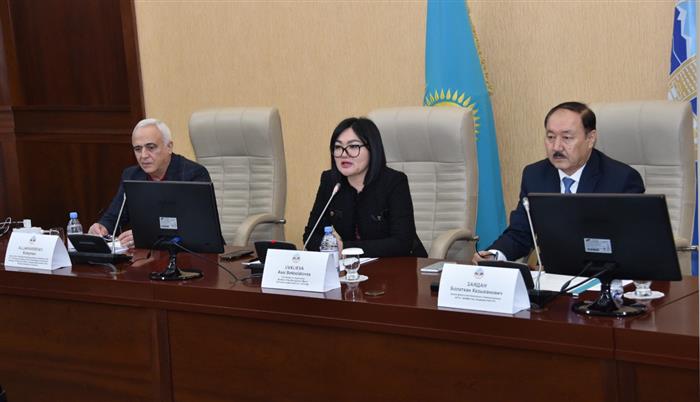 Suleyman Allahverdiyev, head of the International Laboratory of Bionanotechnology of the Institute of Molecular Biology and Biotechnologies of the AR MSE, correspondent member of the Russian Academy of Sciences, delivered a leading lecture on "Alternative energy: achievements, problems and prospects" at the National University of Kazakhstan named after Al-Farabi. The guest of honor was greeted by a member of the Board – the vice-rector for operational activities of KazNU named after al-Farabi Asel Uvalieva. Asel Uvaliyeva briefly noted the achievements and merits of Suleyman Allahverdiyev – a correspondent member of RAS, Laureate of the international energy prize Global Energy. The scientist was named by the company Thomson Reuters-WoS (Clarivate Analytics) as the most cited Russian researcher in the field of biology. He is the deputy editor of 6 international journals of such publishers as Elsevier, Springer, and CSIRO Publishing and a member of the editorial board of more than 15 international journals. Expressing his gratitude to the leadership of KazNU and the Faculty of Biology and Biotechnology for the invitation, Professor Suleiman Allahverdiyev delivered a lecture devoted to the achievements and prospects of alternative energy. During the visit of professor of Moscow State University Suleyman Allahverdiev to the leading university of the country, the guest of honor met with the Chairman of the Board - Rector of Al-Farabi KazNU Zhanseit Tumebayev. The prospects for cooperation between the two universities and the implementation of joint scientific and educational projects were discussed. At the end of the meeting, the scientist was awarded the KazNU medal «Ерен еңбегі үшін» (For excellence in work).