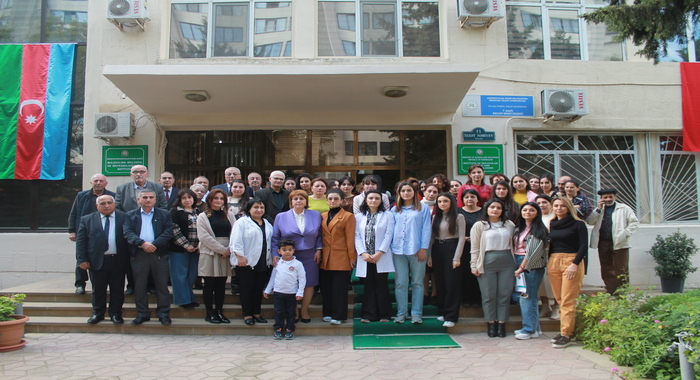 On November 5, an event dedicated to "November 8-Victory Day" was held at the Institute of Molecular Biology and Biotechnologies of RA MSE. First, the national anthem of the Republic of Azerbaijan was played, and the dear memory of the martyrs of the Patriotic War was commemorated with a minute of silence. The general director of the institute, academician Irada Huseynova opened the event and congratulated the staff on the occasion of Victory Day. She noted that the Patriotic War, which began on September 27 and lasted for 44 days, resulted in the glorious victory of Azerbaijan and the liberation of our lands from enemy occupation. Historical justice has been restored. Academician Irada Huseynova noted that it was the return to power of our Great Leader Heydar Aliyev in 1993 that created the basis for the necessity of this victory. The political foresight of President Ilham Aliyev, who achieved the development of Azerbaijan in every field, which is the masterpiece of the Great Leader, and further improved it, the unity of the state with the people and the army ensured that Azerbaijan emerged victorious from the Patriotic War. The Commander-in-Chief once again proved to the whole world that no force can turn Azerbaijan from the right path. Today, our tricolor flag is waving majestically in our freed lands as well as everywhere in our country. During the Patriotic War, the Azerbaijani soldier showed true heroism, bravery, and courage. The huge fortifications built by the enemy spending millions of funds over 30 years were destroyed in a short time, and the war strategy applied by our victorious army became a new example in modern military history. It is already the second anniversary of our victory. During these days, we never forgot our martyrs and their relatives and we will never forget them! Also, some members of the staff have martyrs and veterans in their families. We ask God's mercy for our martyrs and wish good health to our veterans.

At the event, correspondent members of ANAS Ibrahim Azizov, Novruz Guliyev, Ilham Shahmuradov, Firuza Rzayeva, sister of martyr Aslan Rzayev, Ph.D. Mayakhanim Khanishova, mother of veteran Arif Jabrayilov, participants of the first Karabakh war Ph.D. Nurmammad Mustafayev and Mikayil Pashayev made a speech and congratulated the event participants on the occasion of Victory Day, which is a glorious page in the history of the Azerbaijani people.

An employee of the Institute, Fatma Abdullayeva presented the book "The Road to Victory" written by her brother - a participant in the first and second Karabakh wars, who spared his knowledge and experience in the training of professional officers and was closely involved in the achievement of victory, Colonel Yashar Karimov, to the director general of the institute, Irada Huseynova.

Then a film dedicated to "Victory Day" was demonstrated at the event, and the meeting continued with an informal part.