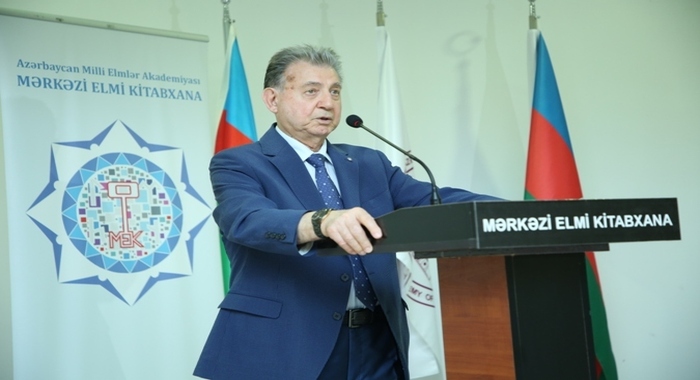 Opening the event, Academician Akif Alizadeh, President of ANAS, gave detailed information on the history of the creation of a library with a rich history of science and culture. He reminded that in November 2011, under the order of President Ilham Aliyev, the foundation of the new building of the Central Scientific Library was laid. He noted that for already 5 years nowadays, the enterprise, which operates modern designs, is currently using the experience of well-known libraries of the world.

The head of ANAS talked about the state care provided to the library and international organizations are interested in cooperating with this organization. At the end of his speech, academician Akif Alizade congratulated the staff of the Central Scientific Library on the jubilee and wished them success in their activities.

Then Vice President of ANAS, acad. Isa Habibbayli spoke about the historical development path of the Central Scientific Library.

The scientist said that the first scientific library was created in Azerbaijan in 1924 by the decree of Abdurrahim bey Hagverdiyev. Later he talked about the history of the enterprise.

The director of the organization, Ph.D. in medicine Leyla Imanova informed about the work done within the last five years, the strategic objectives, the important results achieved, and noted that during this period the library has passed from traditional format to modern format. CSL focused on the quality of the library's activities and reports from quantitative indicators. National Digital Memory, Free Encyclopedic Resources (Wikipedia), and the "Single Management System" have been put into operation, she said.

L.Imanova said that the activity of the library meets international criteria and did not find any projects in the world in any library in the world.

In the end, a film about the 5-year activity of CSL was demonstrated. The film covers all aspects of history and development of CSL.