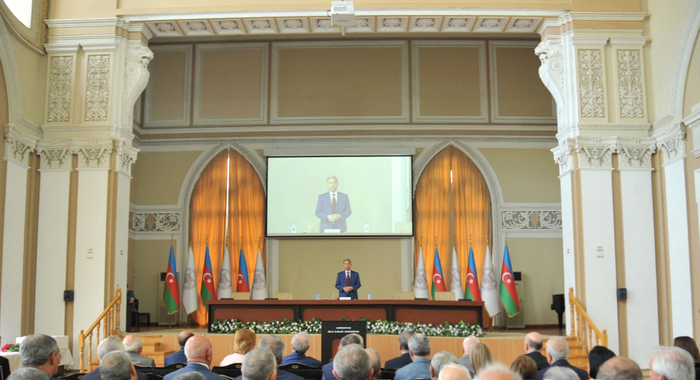 ANAS held an event dedicated to the Day of Knowledge On September 16.

Opening the event, President of ANAS, academician Akif Alizadeh congratulated the masters, wished success in their further scientific work. Academician Akif Alizadeh stressed that, the training of highly qualified specialists and scientific personnel in the society serves to raise the level of education and scientific research in the country, with the support of the country's leadership for the first time in 2015. A. Alizadeh noted that, admission to the master's program carried out in a number of priority specialties.

ANAS President noted that, the creation of a master's program at the Academy is aimed to solving problems in several areas, noting that the most important issue is personnel training. “There is a new step in the direction of staff training at ANAS. From 134 people who graduated from ANAS the 82 are our employees. In general, 166 masters who study at the academy receive not only higher education, but also enrich their skills in our laboratories.

Akif Alizadeh said that, masters who study at the academy will practice in scientific laboratories, get acquainted with the latest achievements of science, defend the thesis on modern and perspective topics and communicate with outstanding scientists. He also noted the creation of all conditions in ANAS for undergraduates in the field of science.

According to academician, the majority of completed master's programmes of ANAS continue their studies in doctoral studies, 48 students continue their studies on the Ph.D. training program. The academician added that five of them were accepted into leading world universities such as Oxford, Montpellier in France, Jilin Agriculture in China, Physical Research in Moscow, one of the graduates of this year entered the Kocaeli University in Turkey on the basis of a scholarship in geophysics.

Academician Akif Alizadeh also spoke about the annual "Master's Competition", which aims to underpin the growth of scientific achievements of undergraduates, and to stimulate students' achievements in education and science. He said that this year the students of the master's degree, as well as those in science and education, will be awarded special scholarships of the President of ANAS.

Giving information about the results of this year's admission, Akif Alizadeh said that this year, the number of students enrolled in ABAS was twice higher than in previous years. This is a vivid example of the growing interest of young people to study at the Master studies of ANAS, he noted

"For the first time, ANAS has started its paid master's training this year," said A. Alizadeh, adding that 120 students from 22 specialties and 75 specialties have been admitted to the magistracy of ANAS this year.

Then, academician-secretary of ANAS, corresponding member of ANAS Aminaga Sadigov presented statistics on the results of admission to the magistracy. He spoke about the achievements of the magistracy in the academy, innovations and achievements in the educational policy of master studies of ANAS.