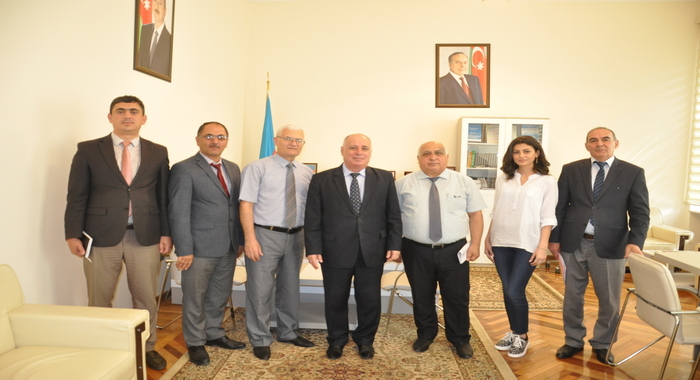 The contract between the Institute of Molecular Biology and Biotechnologies of ANAS and Lankaran Regional Scientific Center of ANAS and Lankaran State University on joint research and staff training was concluded in 2019. Deputy director on scientific affairs of IMBB, PhD in Biology, Associate Professor Alamdar Charkaz Mammadov, Head of the laboratory of Cell membrane systems, doctor of biological sciences Saftar Yusif Suleymanov and Head of the Photobioenergetics laboratory, doctor of biological sciences Yashar Mirza Feyziyev were sent to Lankaran State University and Lankaran Regional Scientific Center to carry out the work under the contract on 19-20 September,2019.

On September 19, the meeting was held with the director of LRSC, doctor of agrarian sciences Farman Guliyev, deputy director on scientific affairs, PhD in technics Iltifat Karimov and rector of LSU, doctor of mathematical sciences, Professor Natig Ibrahimov, Head of the Department of Biology and Medical Sciences, PhD Ramiz Shammadov. At the meeting, extensive scientific discussions were held on the basic research and analysis of the results obtained, and possible scientific directions were identified together with IMBB. Following the meeting held at the Lankaran Regional Scientific Center of ANAS, the field of Genofond cultivation of different types and varieties of citrus plants was examined. It had been found that the gene fund of tea varieties, pomegranates and lemons have high levels of agrotechnical maintenance and that the gene funds were in good condition.