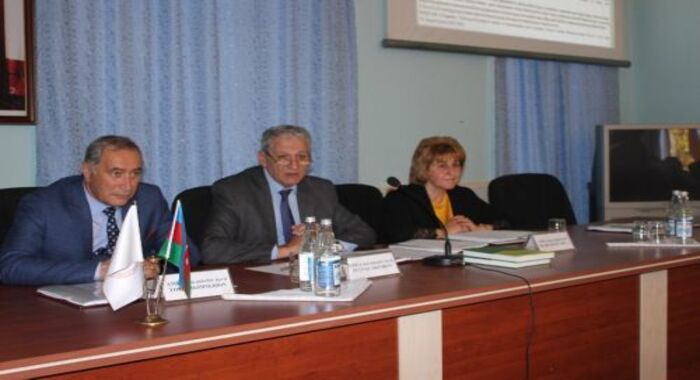 On November 08, 2019 the joint meeting of the Department of Biological and Medical Sciences of ANAS and the Scientific Council of the Institute of Dendrology of ANAS was held + Photo Nov 09, 2019 | 16:39 / Conferences, assemblies

On November 08, 2019 the joint meeting of the Department of Biological and Medical Sciences of ANAS and the Scientific Council of the Institute of Dendrology of ANAS was held. Vice-president of ANAS, real member of ANAS Irada Huseynova, Deputy Secretary of the Department of Biology and Medical Sciences, correspondent member of ANAS Zeynal Akparov, scientific secretary of the department, Phd of agrarian Afig Mammadov also attended.

The report of the Institute of Dendrology of ANAS on the results of scientific and scientific-organizational activity of 2019 was heard at the meeting. Reporter Tofig Mammadov, director of ANAS Institute of Dendrology, correspondent member of ANAS provided detailed information on the work carried out at the Institute of Dendrology of ANAS in connection with the implementation of decisions and decrees of the President of the Republic of Azerbaijan, Cabinet of Ministers, state programs. There were presented 1 problem, 8 topics, 14 studies, 38 stages of research and the results for 2019 obtained. The members of the Scientific Council were informed about the applied scientific results and the work done on the basis of economic agreements.

The rapporteur noted that in recent years, the interaction between fundamental science and education has become much stronger. In 2019, the international relations of the Institute increased significantly, and the staff of the institute participated in several international conferences. He noted the publishing activity of the Institute and noted that the number of articles published in high-impact journals has increased significantly over the past year.

Corresponding member of ANAS Tofig Mammadov noted that the Institute pays special attention to the training of young scientific personnel, creates all conditions for doctoral and doctoral students and conducts scientific researches in laboratories equipped with modern equipment.

As a result of the report, a comprehensive monitoring of Azerbaijani dendroflora was carried out in 2019, with 89 families, 5 h / f, 266 genus of 1,141 species being distributed in natural and cultural conditions. The species studied were grouped according to the APG III-IV system, with distribution areas, botanical description, and environmental and environmental aspects. As a result of the research, for the first time, a five-volume book of Azerbaijani dendroflora was published.

Observations were made in the Seaside National Park, 51 families, 78 genus and 97 species of ornamental trees, shrubs and grasses were discovered. The taxonomic composition of the herbariums was collected and grouped according to their decorative features in the greening.

Pinus eldaica and Gleditsia caspia In order to assess the location and size of defects, 2D imaging tomography equipment (Arbotom®) was developed by Rinntech (Heidelberg, Germany). Through this device, electrical impulses were transmitted to the trunk, and the sequence and processes of damage to the plant were determined. The reasons for the disease and development of the species have been eliminated by identifying the effects of environmental factors on the plant causing the rot.

Speakers of the report considered the activity and results of the Institute satisfactory.

In the end the annual activity of the institute was positively assessed and a decision was made to adopt the annual report.