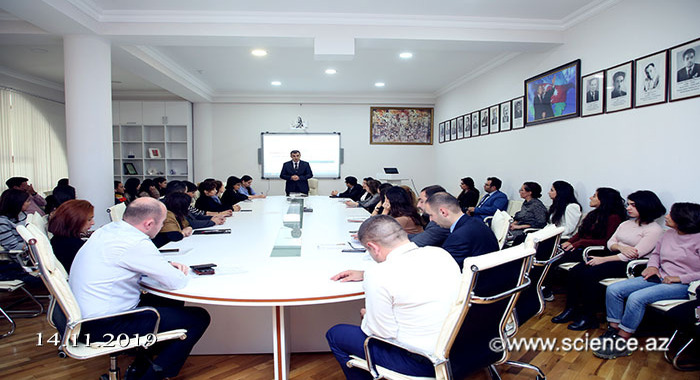 The next meeting of the Council of Young Scientists and Specialists of ANAS (CYSS) was held on November 14 in the Electronic Assembly Hall of the Institute of Literature.

Reports of ANAS Divisions of Social, Biological and Medical Sciences, as well as the Council of Young Scientists and Specialists of Ganja and Nakhchivan divisions for the current year were listened.

Opening the meeting chairman of CYSS, PhD in Physics, Associate Professor Famin Salmanov noted that significant progress was obtained during a report year in the council led by him. He noted multi-faceted works have been done in uniting of science and education, increasing the popularity of science, develoing the potential of Azerbaijani youth in line with modern requirements, integrating young professionals into world science, as well as improving their social conditions and leisure time.

Division secretaries informed about tasks arising from the President's orders, decisions of the Presidium of ANAS, conferences and scientific workshops, published books and monographs, including articles published in impact factor journals, participation in international projects, staffing issues and other achievements.

Later on, members of the ANAS CYSS board of members – PhD in Chemistry Afsun Sujayev, PhD in Philology Eshgana Babayeva and others made shared their opinions and suggestions on the reports.

Finally, submitted reports were accepted by the CYSS.