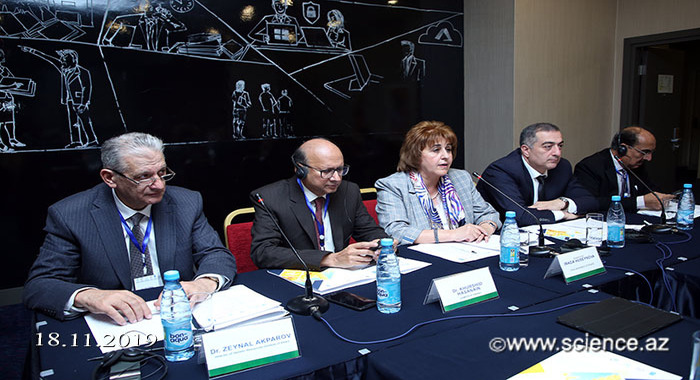 "The role of genetic resources in the creation of new varieties and integration of the seeding system" international workshop kicked off + Photo Nov 18, 2019 | 18:00 / Conferences, assemblies

The 2nd international consultative workshop “The Role of Genetic Resources in the Creation of New Varieties and Integration of the Seeding System” was held in Baku on November 18.

The initiator of the project is the Pakistan Office for Agriculture and Food (FAO) and the Pakistan Institute of Science and Technology (COMSTECH). The event is attended by leaders and specialists in plant genetic resources and seed production from Azerbaijan, Pakistan, Kazakhstan, Oman and Jordan, as well as representatives of the United Nations Development Program (UNDP), JICA, the World Bank and Asian Development Bank.

Opening the workshop, ANAS vice - president academic Irada Huseynova noted that our country has historically rich plant resources and a genetic background, all information on this issue is currently collected at the Institute of Genetic Resources, established in 2003 by decision of the Cabinet of Ministers. “The National Bank of Genetic Resources plays a special role in ensuring food security,” said academic Irada Huseynova, and referring to the need to create competitive plant varieties and a sowing system, she noted that Pakistan has rich experience in this field.

Then Deputy Minister of Agriculture Elchin Zeynalov recalled the National Strategy for the Conservation and Sustainable Use of Biodiversity in Azerbaijan for 2017-2020, approved by the head of state” and noted that in recent years research institutes of Ministry of Agriculture have created new varieties using local and international varieties and transferred them to the National Genebank of the Institute of Genetic Resources. “We are certainly interested in attracting new methods within the framework of the project in cooperation with ANAS, creating a system for the development of new sustainable and productive varieties with their use, as well as improving the sowing system”, the expert concluded.

Zeynal Akperov, director of the Institute of Genetic Resources of ANAS, spoke about the work done to collect, protect and rationally use plant genetic resources in the country, their collection (currently more than 13,000 species of local plants are in medium-term and long-term storage in the national bank). The scientist also recalled that the Law of the Republic of Azerbaijan “On the Protection and Efficient Use of Cultural Resources for Cultivated Plants” was adopted in 2011, and that this document plays an important role in the management of general resources in the country, and the international project will contribute to the creation and selection high-yielding plant varieties using the most modern technological methods.

Dr. Khurshid Khasanain, Advisor to COMSTECH, who spoke later, spoke about the work carried out jointly with the Azerbaijani Genebank in the field of genetic resources, and said that further cooperation within the project will only expand.

This was confirmed by FAO expert Shaquille Khan, who made a presentation of the project, the main purpose of which is to study the genetic resources of plants (wheat, barley, corn, peas, etc.), and also, using the latest technology, to obtain new varieties and properly organize the system seeding. According to the expert, for five years, while the project is underway, Pakistani colleagues will share their country’s experience with their partners, conduct research on new varieties of crops using genomic editing and selection based on markers, and take measures to bring planting systems in accordance with international standards.