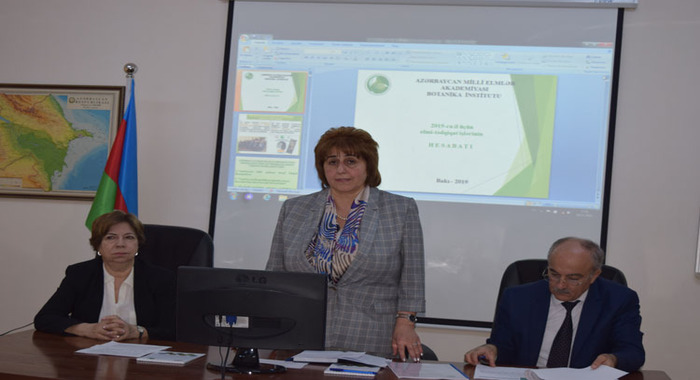 Report meeting of the Institute of Botany on the results of scientific and organizational activity for 2019 was held + Photo Nov 21, 2019 | 16:14 / Conferences, assemblies

Opening the meeting academician Irada Huseynova gave the floor to the director of the Institute, Academician Valida Ali-zadeh, to present a report on the scientific and organizational activities of the Institute of Botany for 2019.

Academician V.M.Ali-zadeh noted that 2019 would be remembered by a number of significant events in the life of the Institute, and informed about the first general meeting of the Azerbaijan Botanical Society Public  Union, state registration of the society by the Ministry of Justice. She also added that on June 20, a scientific symposium dedicated to the 125th anniversary of the birth of prominent researcher of flora and plant cover of Azerbaijan, correspondent member of ANAS Ivan Ivanovich Karyagi was held. She presented the most significant results in the department and laboratories throughout the year, noting that researches were carried out in 50 phases out of 17, covering 11 topics within 2 problems in 2 directions according to the research plan of the Institute. The total number of scientific publications published by the Institute this year is 85, including 3 books, 1 book chapter (abroad), 48 articles (32 abroad) and 33 theses (24 abroad), 5 of 11 articles published in prestigious scientific publications -Web of Science, 3-Scopus, 3-Copernicus. She also noted that two patents were issued this year, and  II-III issue of the International Journal of “Plant and Mushroom Studies” was published in English.

At the end of the meeting academician VM Ali-zadeh noted that 3 of the staff of the Institute were awarded the honorary decrees of the Department of Biology and Medical Sciences in honor of Science Day, and Lala Isgandarova, the 2nd-year master student of the Institute, ranked the first place in Master-2019 competition.

Academician V.M. Ali-zade answered the questions in detail. Then there were speeches made around the report and suggestions for accepting the report were made

Chairman of the meeting, academician I.M.Huseynova positively evaluated the report of the Institute of Botany, announced the decision to accept the report and concluded the meeting..