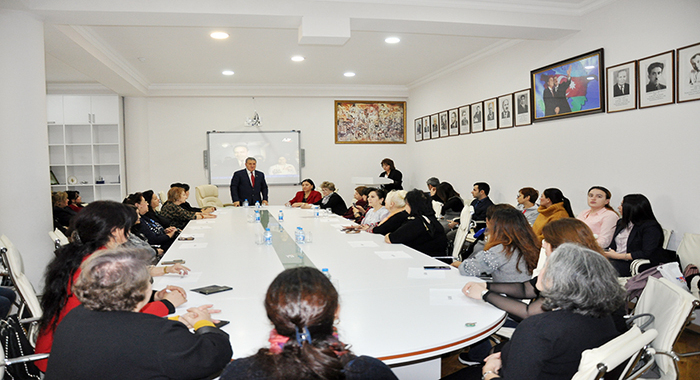 On December 2, Council of Women of ANAS has held an event dedicated to the memory day of national leader Heydar Aliyev.

The event, which was held in the Electronic Assembly Hall of the Institute of Literature named after Nizami Ganjavi of ANAS, was attended by vice - presidents of ANAS academicians Isa Habibbayli and Irada Huseynova, chairman of the Council of Women of ANAS, Doctor of philosophical sciences, Professor Rena Mirzazadeh, director of the Institute of Oriental Studies academician Govhar Bakhshaliyeva, as well as chairmen of councils of women of the scientific institutions and organizations of ANAS.

Opening the event, Academician Isa Habibbayli spoke about exceptional merits of the architect and builder of independent Azerbaijan Heydar Aliyev in the development of the state and people. He said that the name of the great leader, who devoted his whole life to the development and well-being of his state and people is written in golden letters in the history of Azerbaijan.

Having made an excursion into history, ANAS vice-president spoke about the work done by the national leader in the field of protecting national interests and developing national consciousness, increasing economic power and developing social and cultural spheres in the country. He noted that life and work of this ingenious person, who played a huge role in the life and history of our people, is an example for every Azerbaijani.

Academician Isa Habibbayli spoke about the great merits of the great leader in the development of scientific, political, economic and cultural spheres, as well as in the modern activities of ANAS. He said that national leader has always been with great attention and care to the development of science, including ANAS. After Heydar Aliyev’s coming to power for the second time, the danger of closing the academy was eliminated and a new period of development of domestic science began.

ANAS vice-president noted that at present all the ideas of the great leader Heydar Aliyev are being consistently and successfully implemented. The activities of Ilham Aliyev are aimed at the successful development of independent Azerbaijan in accordance with the realities of the new era, the country is confidently stepping towards a bright future.

Then, academician Irada Huseynova, director of the Institute of Oriental Studies named after academician Ziya Bunyadov, academician Govhar Bakhshaliyev and professor Rena Mirzazadeh spoke on the huge role of the great leader Heydar Aliyev in the creation and development of modern independent Azerbaijan.

In conclusion, film “Heydar Aliyev and State Women's Policy” was shown, dedicated to the life and work of the great leader.