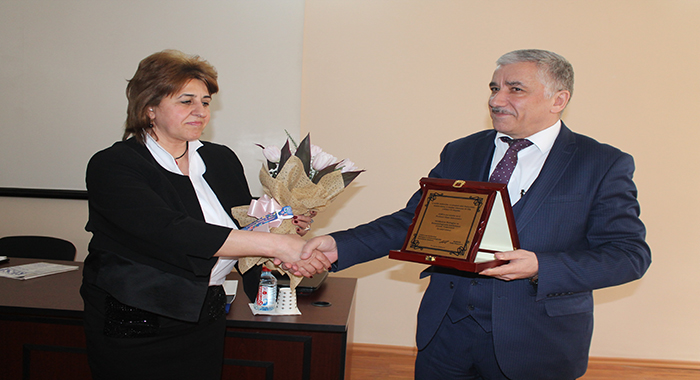 On March 13, at the Scientific Council of the Institute of Molecular Biology and Biotechnologies of ANAS  an event, dedicated to  the scientific activity and 60th anniversary of  correspondent member of ANAS,  Doctor of Biological Sciences, head of Bioinformatics laboratory of the institute Ilham Shahmuradov, was held.

Opening the anniversary event, the director of the institute, academic Irada Huseynova emphasized that Ilham Shahmuradov repeatedly represented our country abroad. He worked as a researcher at the Sanger Science Center in the United Kingdom, in 2000-2001 at the Heliks Research Institute in Japan, in 2001-2005 at the Department of Computer Science of Royal Holloway College at the London University, in 2007-2010 he was a professor at the Information Technology Institute of COMSATS in Pakistan, in 2015-2016 he conducted research at the King Abdullah University of Science and Technology in Saudi Arabia.

As a result of the intensive work and scientific research of  I.Shahmuradov, a number of high-precision computer analysis tools that allow searching for transcription start sites and elements of their regulation, primary mRNA polyadenylation sites in human, animal and plant genomes -PromH, PromHP, TSSP-TCM and POLYAR programs- were developed and the PlantProm database on promoters of RNA polymerase II for plants was created.

The results of his research were published in international scientific journals such as " Nucleic Acids Research" , "Bioinformatics",  "Plant Molecular Biology ", "BMC Genomics",  "Applied and Computational Mathematics" and  internaional publishing houses such as "World Scientific” and“Springer Science+Business Media, Humana Press.” He is the author of more than 60 scientific articles, as well as the first dictionary in Azerbaijani on bioinformatics terms. Under his leadership, 3 PhDs have been prepared and currently I.Shahmuradov is a scientific supervisor of  3 PhD and 4 doctoral dissertations

The effective activity of Ilham Shahmuradov in the scientific and pedagogical sphere was highly appreciated by our state and he was selected as a correspondent member of ANAS in "Bioinformatics" in 2014, and in 2015 was awarded the order "Tereggi".

Correspondent member of ANAS Novruz Guliyev, Professor Saftar Suleymanov, Doctor of Chemical Sciences Sirajaddin Sarkarov and others congratulated I.Shahmuradov on his 60th birthday, told about his high human qualities and shared their memories of the scientist.

Then, Academic I.Huseynova presented the scientist with the Certificate of Honor of the Institute.

In conclusion, a short documentary  reflecting the life and scientific activities of I.Shahmuradov "Crossroads: from mathematics to biology" was demonstrated.