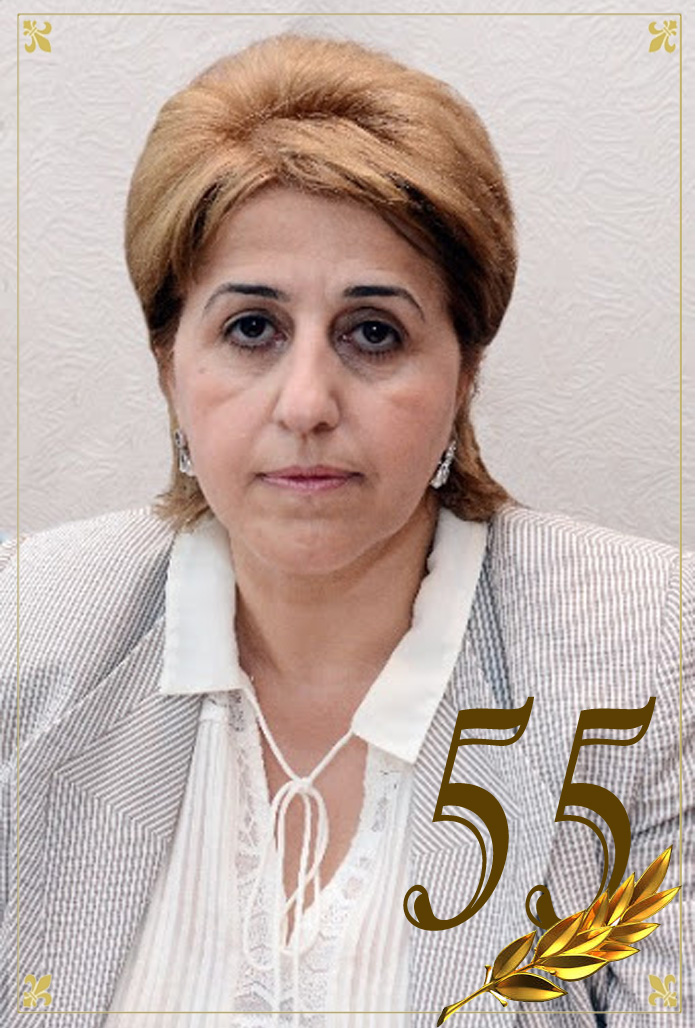 Today, academician Irada Huseynova, a famous biologist and vice-president of ANAS, chairwoman of the Academic Council of the Division of Biological and Medical Sciences, director of the Institute of Molecular Biology and Biotechnology, turns 55 years old.

Irada Huseynova was born on May 24, 1965 in the city of Ordubad of the Nakhchivan Autonomous Republic in an intellectual family.

She graduated with honors from the Faculty of Chemistry of Azerbaijan State University (now Baku State University, BSU) in 1987 and entered the graduate school of the Institute of Botany of ANAS with a degree in molecular biology.

I. Huseynova defended her thesis in 1994 and her doctoral thesis in 2004. By the decisions of the Higher Attestation Commission under the President of the Republic of Azerbaijan, she was awarded the title of Senior Researcher in 2002 and Professor in 2009. She was elected a corresponding member of ANAS in 2007 and an active member in 2014.

Academician I. Huseynova was appointed director of the Institute of Molecular Biology and Biotechnology, created in 2016 on the basis of the department of fundamental problems of biological productivity of the Institute of Botany of ANAS. In 2018, she was elected vice president of ANAS, member of the Presidium of ANAS. Since 2019, she has been Chairman of the Scientific Council of the Department of Biological and Medical Sciences of ANAS.

Scientists have comprehensively studied the molecular genetic mechanisms of synthesis, assembly and formation of structural and functional components of the photosynthetic membrane of higher plants - pigment-protein complexes; the possible role of photosynthetic changes in the adaptation of plants to extreme growing conditions has been established and the molecular foundations of the protective and adaptation processes of wheat plants

abiotic (drought, salt stress, radiation) and biotic stresses (race, virus, phytoplasma) have been elucidated. As a result of the research, a number of important results were obtained that are of fundamental and practical importance.

She is the author of about 400 scientific works (60 of which were published in authoritative journals), 4 monographs, 2 books, 4 booklets, 10 book chapters and 1 methodological manual. The results of her scientific work were presented at numerous international congresses, conferences and symposia and published in a number of prestigious publications around the world (“Nauka”, “Springer”, “Wiley”, “Nova Publisher”, “Dova Publisher” and others).

The academician is the Deputy Chairwoman of the Scientific Council on Molecular Biology, Bioengineering, Biomedicine of the Council for the Coordination of Scientific Research of the Republic of Azerbaijan and the Deputy Plenipotentiary of the National Committee on Bioethics, Ethics of Scientific Knowledge and Technology at UNESCO.

Since 1999, along with scientific activities, the scientist is engaged in pedagogical activities. He lectures on the subject "Molecular Biology" at the Faculty of Biology of BSU, in various specialties in the master studies of ANAS and BSU. He is a professor at the Department of Biophysics and Molecular Biology, BSU. Under her leadership, 6 bachelor's and 20 master's theses were defended.

We congratulate the famous biologist I. Huseynoa on her 55th birthday, and wish her robust health and success in the development of Azerbaijan science.