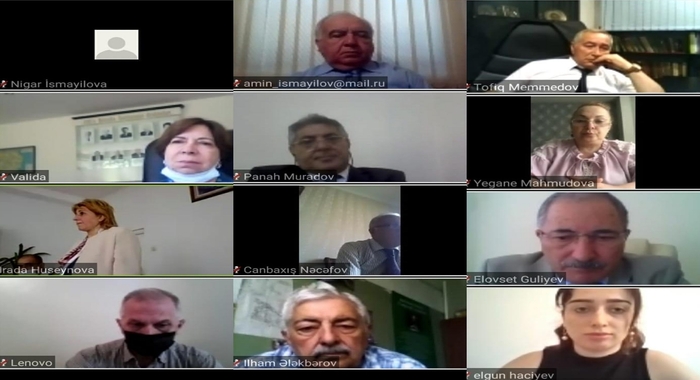 On June 11, 2020, an online event dedicated to the 90th anniversary of academician Seyfeddin Aliyev was held at the Institute of Zoology. Opening the event Vice-president of ANAS, head of the Division of Biological and Medical Sciences, director of IMBB academician Irada Huseynova,  on behalf of our people expressed her gratitude to the President for his correct policy, timely decisions and preventive measures aimed at minimizing the impact of the pandemic. "We are strong together!" said the President of the Republic of Azerbaijan Ilham Aliyev with great foresight. The call has proved its real power and importance in solving fateful issues in real life, in the most difficult processes.

I.Huseynova noted that this event dedicated to the 90th anniversary of academician Seyfeddin Aliyev. S.Aliyev is an author of 168 scientific works, including 3 monographs, 4 books written to help agricultural workers, 3 popular-scientific books. He is one of the authors of the textbook "Zoology" for 7-8 grades of secondary school, 10-volume "Encyclopedia of Azerbaijan" and one of the authors who translated Dogel's textbook "Invertebrate Zoology" for universities from Russian into Azerbaijani. He is the main compiler and managing editor of the 2nd volume of monography “Animal world of Azerbaijan” published in Azerbaijani and Russian. Moreover, he is an editor of 9 textbooks written for high schools, 2 lesson reference books, 6 monographs, 4 booklets, as well as he is a compiler of zoology and entomology given in the IV  volume of the Explanatory dictionary of the Azerbaijani language. I.Huseynova spoke about the qualities that make Seyfaddin Aliyev both a person and a scientist and noted that the scientist was awarded an honorary degree in the Division of Biological and Medical Sciences.

Later director of the Institute of Zoology, doctor of biological sciences, associate professor Elshad Ahmadov spoke about the contributions  Seyfeddin Aliyev gave to Azerbaijani science. At the event prof., doctor of biological sciences Canbakhish Najafov, correspondent member of ANAS prof. Ilham Alakbarov, Ph.D. Gara Fataliyev, and others made a speech. At the end of the event, a film dedicated to Seyfeddin Aliyev was demonstrated.