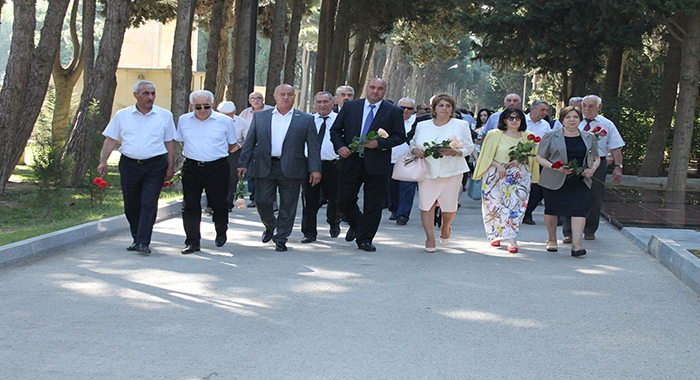 On June 29, on the occasion of the 90th anniversary of outstanding scientist, genius personality, academic Jalal Aliyev, employees of the Institute of Molecular Biology and Biotechnologies, Institute of Botany, Research Institute of Crop Husbandry, Institute of Physiology and Institute of Dendrology of ANAS and the scientist’s students visited his grave in the Alley of Honor. They shared memories of their mentor and honored his memory with prayers and laid wreaths and flowers on his grave. Then an event dedicated to the anniversary was held at the Institute of Molecular Biology and Biotechnologies. The event began with a minute of silence on the memory of the academic. New vice-president of ANAS, director of the Institute of Molecular Biology and Biotechnologies, academic Irada Huseynova said she was proud of being a student at Jalal Aliyev’s school and talked about unprecedented services of the scientist in Azerbaijani science. I. Huseynova spoke about the positive human qualities of her teacher and noted that his students take an example from life of Jalal Aliyev. Modern science school created by him and dozens of talented students of this school today conduct research in Azerbaijan and the most influential centers of the world, raise the name of our republic and Azerbaijani science with the new scientific achievements. At the end of the event documentary film “Life dedicated to science” was demonstrated.