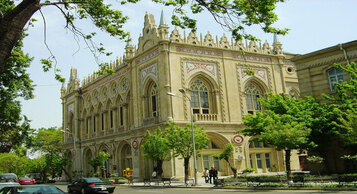 Statement of the Presidium of the Azerbaijan National Academy of Sciences Sep 27, 2020 | 20:58

As it is known, in the morning of September 27, 2020, the Armenian armed forces provoked and intensively fired on the Azerbaijani villages along the frontline, as well as the positions of our army. In response to this provocation, which resulted in casualties among civilians and servicemen, the Azerbaijani Armed Forces launched a large-scale counter-offensive on the entire front against the occupying Armenia on the orders of Supreme Commander-in-Chief Ilham Aliyev. As a result of the determination and courage of the heroic Azerbaijani Army, 6 occupied villages of Fuzuli region and 1 village of Jabrayil were cleared of Armenian invaders. Meanwhile, according to the official information of the Ministry of Defense, our army confidently advanced in the direction of Aghdara and took control of strategically important positions. As a result of the crushing blows inflicted on the Armenian army during the fighting, the enemy was forced to retreat, losing a large number of manpower and equipment. It is no coincidence that at the meeting of the Security Council, President Ilham Aliyev rightly described the achievements of our army as a serious military victory and congratulated our people….

Full text is available on the Azerbaijan section of the web-site.