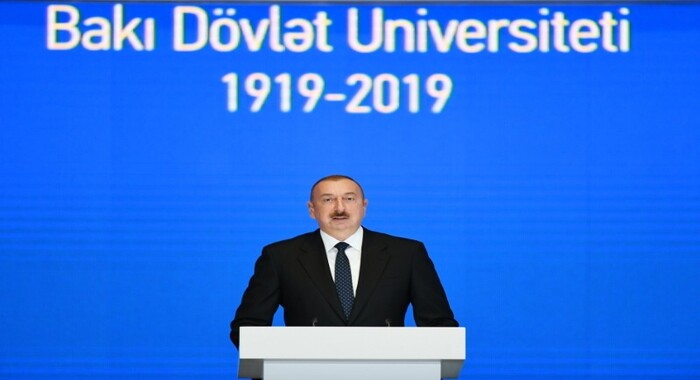 On November 26, international conference on the integration of science and education (ISE-2019) dedicated to the 100th anniversary of Baku State University (BSU) was held.

President of the Republic of Azerbaijan Ilham Aliyev attended the ceremony.

The head of state congratulated the Azerbaijani people on the 100th anniversary of Baku State University. Speaking about the important role of BSU in the fate of this nation, the head of the country noted that the university has made a significant contribution to the country's comprehensive development for over 100 years.

Reminding that BSU was founded by the decision of the Azerbaijan People Republic (APR), President Ilham Aliyev said that the university continued its activities in the new socio-political period after the collapse of the APR. He noted that over the past 100 years, about 200,000 university graduates have demonstrated their knowledge and skills in various areas of Azerbaijan. Among the graduates were prominent personalities, scientists, public figures, politicians and specialists.

The head of the country noted that the national leader of the Azerbaijani people, Heydar Aliyev, was also a graduate of the Baku State University and stressed out that national leader rendered unprecedented merits to our people and the state both in the Soviet period and after independence.

Then, rector of Baku State University Elchin Babayev spoke about the glorious and honorable path of the university. He expressed gratitude to the head of state for participating in the centenary of the founding of Baku State University, which the national leader of the Azerbaijani people Heydar Aliyev called "National wealth and national pride of the Azerbaijani people and the Republic of Azerbaijan."

E. Babayev brought to the attention that the university he headed was the first higher educational institution of a new type in the Muslim East, this holy center of education was created by patriotic intellectuals, scientists, enlighteners and cultural figures with national fanaticism, perseverance and struggle.

Noting that over the period of its activity, the university trained more than 200 thousand specialists, including hundreds of highly qualified personnel for a number of foreign countries, E. Babayev added that at present the university is successfully continuing its mission.

The rector noted with pride that 93 out of 176 active and corresponding members of the Azerbaijan National Academy of Sciences, 46 out of 117 members of the Milli Majlis, most of the heads of higher structures are graduates of Baku State University.

Professor of the university Doctor of juridical sciences Firuza Abbasova, professor of the University of Maryland, ADA University and the National Aviation Academy Roald Sagdeyev, second-year student of the Faculty of Journalism Rashad Imanov also spoke at the event.

Lectures by Roald Sagdeyev on “Best Practices in Integrated Research and Education”, President of the Holon Institute of Technology (Israel) Professor Eduard Yakubov on “Higher Education and Research in the Age of Innovation, Technology and Entrepreneurship”, Head of the Cambridge Molecular Biology Laboratory Professor Garib Murshudov on "The relationship of science and education: research institutes and universities" etc. were listened in the conference.

The ceremony dedicated to the 100th anniversary of Baku State University ended with the performance of the anthem of this great educational institution and congratulations from representatives of universities of different countries.