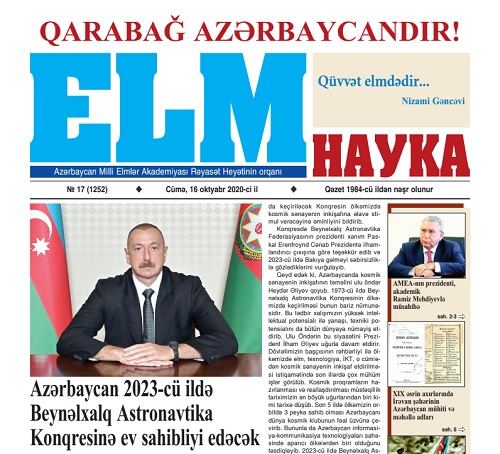 Under the slogan "Karabakh is Azerbaijan!" the 17th edition of the "Elm" newspaper, which is the weekly printed organ of the Presidium of ANAS, was released.

The front page of the newspaper contains the speech of President Ilham Aliyev at the opening ceremony of the 71st Virtual International Astronautical Congress "Launching Cyberspace".

The next page reflects an interview with academician Ramiz Mehdiyev, an address of the President of ANAS on behalf of the scientific community of Azerbaijan to the world community, heads of leading international organizations, as well as letters to the heads of a number of world academies and scientific centers, as well as an article on getting acquainted with the material the technical base of the Institute of Molecular Biology and Biotechnology and with the conditions created here.

Further, articles were published on the support of scientific institutions and organizations of ANAS of the Fund for Assistance to the Armed Forces, letters of academicians Ismail Hajiyev, Fuad Aliyev, Nazim Mammadov and corresponding member of ANAS Bakhtiyar Mammadov addressed to the President of the country, as well as statements by Russian scientists Nabiyula Gichiev, Sergey Kirsanov and Chinese scientist Yang Zhinin in support of the territorial integrity of Azerbaijan and condemnation of the aggressive policy of Armenia.

Readers can also familiarize with the articles “Azerbaijani environment and the names of the environs of Yerevan at the end of the 19th century”, “A new look at improving the activities of Azerbaijani archeology”, “Captured monuments of Khojaly”, interviews with the director of the Institute of Biophysics, corresponding member of ANAS Oktay Gasimov, and others.