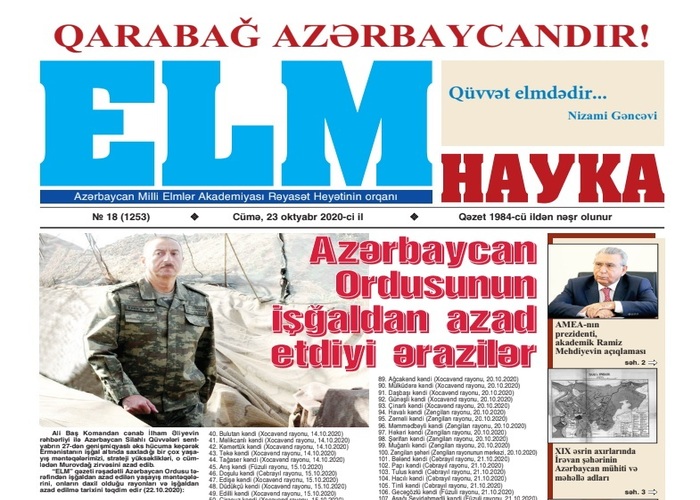 Under the slogan "Karabakh is Azerbaijan!" the 18th issue of "Elm" newspaper, which is the weekly printed organ of the Presidium of ANAS, was published.

The front page of the newspaper reflected the names of 143 settlements liberated by our army from September 27 to October 22 under the leadership of the President of Azerbaijan, Supreme Commander-in-Chief Ilham Aliyev.

On the next pages of the press organ, readers can familiarize themselves with the statement of the President of ANAS, academician Ramiz Mehdiyev on anti-terrorist operations conducted by our army, the speeches of academicians Isa Habibbayli, Rasim Alguliyev and Govhar Bakhshaliyeva in support of our army.

In addition, the newspaper published the texts of interviews with the vice-president of ANAS, academician Irada Huseynova about the main areas of activity of biologists during the coronavirus pandemic, as well as with the chairman of the Albanian-Udi Christian religious community of the Republic of Azerbaijan, Robert Mobili, information about the funds transferred by scientific institutions and organizations ANAS to the Fund for Assistance to the Armed Forces, letters of ANAS corresponding members Aminaga Sadigov, Ogtay Samadov and scientists of the Institute of Physics to the President of the country, condemning the occupation policy of Armenia, statements by the world famous academician Roald Sagdeev and President of the International Slavic Academy Sergei Baburin.

The pages of the newspaper also reflected the articles “The Azerbaijani environment of the city of Irevan and the names of the surroundings at the end of the 19th century”, “Manuscript treasures and famous orientalists”, “Destroyed historical monuments - a vivid proof of Armenian vandalism”, “The principle of multidisciplinarity in the development of modern science”, etc.