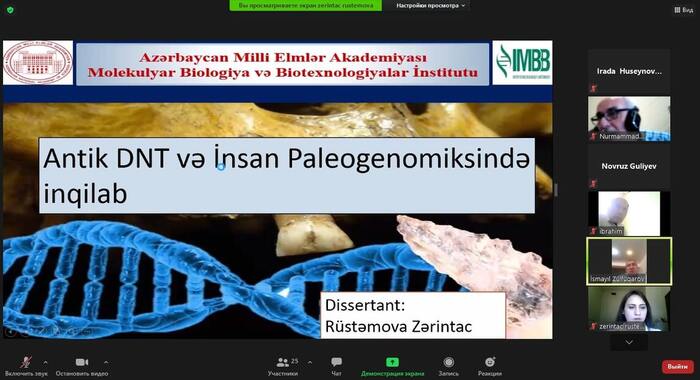 A scientific seminar was held at the Institute of Molecular Biology and Biotechnology on May 24. Zarintaj Rustamova, a master's degree graduate of MBBI and a junior researcher at the Population Genomics Laboratory, spoke at the seminar on "Antique DNA and the revolution in human paleogenomics." The researcher spoke about the problems that arise in aDNA research, the factors affecting the integrity of aDNA, its areas of application. Z.Rustamova noted that the information obtained from aDNA helps us to obtain biological information about the ancestors and roots of humans, to make hypotheses related to ancient populations. Several human, animal, and plant remains have been found in the ancient human settlements of Azerbaijan, and it is possible to conduct archeological research in the future. The speech was met with interest by the seminar participants and extensive discussions were held on the topic.