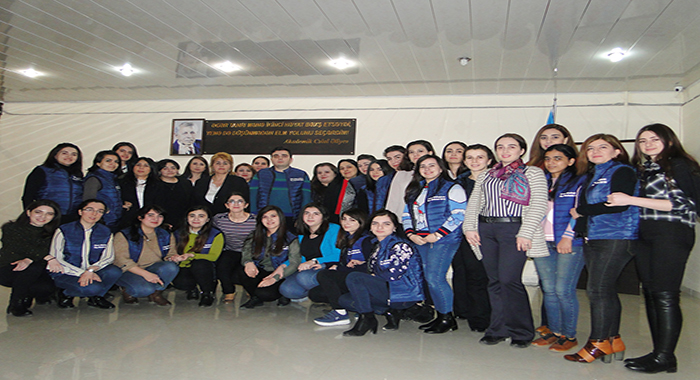 “Winter school of young biologists – 2019” has been jointly organized by the Division of Biological and Medical Sciences andCouncil of  Young Scientists and Specialists of ANAS. The event, which took place at the Institute of Molecular Biology and Biotechnologies, was attended by Academician-Secretary of the Division, academician Ahliman Amiraslanov, Scientific secretary of the division, PhD in agrarian sciences Afiq Mammadov, Chairman of the Council of Young Scientists and Specialists of ANAS, Associate Professor Famin Salmanov, directors of the institutes of the division, master and PhD students and the students of the Azerbaijan State University and Azerbaijan State Agrarian University.

Opening the event, academician Ahliman Amiraslanov noted that academician Akif Alizadeh, the President of ANAS, very concerned about attracting the youth to science. The events of such kind serve the purpose of the formation of the scientific discussion skills of the young specialists. At present, achievements of molecular biology and biotechnology are used in various branches of science and are applied to practice. The creator of this school in Azerbaijan was academician Jalal Aliyev. The Institute of Molecular Biology and Biotechnologies was established on the base of a department led by Jalal Aliyev. A. Amiraslanov announced the opening of the Winter School, greeted the youth on behalf of academician Akif Alizadeh and wished success to the participants of the event.

Director of the Institute of Molecular Biology and Biotechnologies, academician Irada Huseynova greeted the participants and expressed deep gratitude to them. The youth is the cornerstone for every nation. The future of the people depends on the presence of highly intellectual young people. By supporting the youth we are building a foundation for the Azerbaijani science. Today, thanks to the youth policy pursued by president Ilham Aliyev, our youth gained great success in science, culture and sport. Conducting of Master courses at ANAS, sending doctorates abroad, holding various contests form basis for these achievements. At the end of the speech I. Huseynova expressed her conviction that great scientists would be among the young people attending this winter school.

Director of the Institute of Microbiology, academician Mammad Salmanov noted that today great attention is paid to the youth engaged in science. Science has always played a key role in the development of the country, and young people have always been a leading force. We, the elderly generation, are always ready to help young people.

Academician Valida Alizade, director of the Instituteof Botany, noted that it is a great happiness to be engaged in science. She gave her recommendations to the youth and wished them success in their future careers.

Chairman of the Council of Young Scientists and Specialists of ANAS, Associate Professor Famin Salmanov emphasized that today’s Winter School is the second project of the Council. Previously, the summer school of chemists was held and was highly appreciated by the leadership of ANAS. This year’s activity of the division was highly appreciated. A young specialist of the division was presented the President’s award, two young specialists were presented the prize of the Ministry of Youth and Sports and two others were awarded a certificate of honor of ANAS. Famin Salmanov expressed his gratitude to the leadership of the Academy, the Division of Biological and Medical Sciences and the Institute of Molecular Biology and Biotechnologies for the organization of such an event.

Later, reports were made at the winter school. First, the vice president of ANAS, academician Irada Huseynova gave a masterclass on "From molecular biology to modern agriculture and medicine: new look at problems". I. Guseynova gave detailed information about the history of molecular biology and emphasized the main tasks facing this science. She noted that the development of molecular biology promotes the solution of problems in agriculture, energetics and medicine. The academician informed participants also about the main directions of the modern biotechnology.

The first day of the winter school, scheduled for February 27-March 1, was successfully completed.