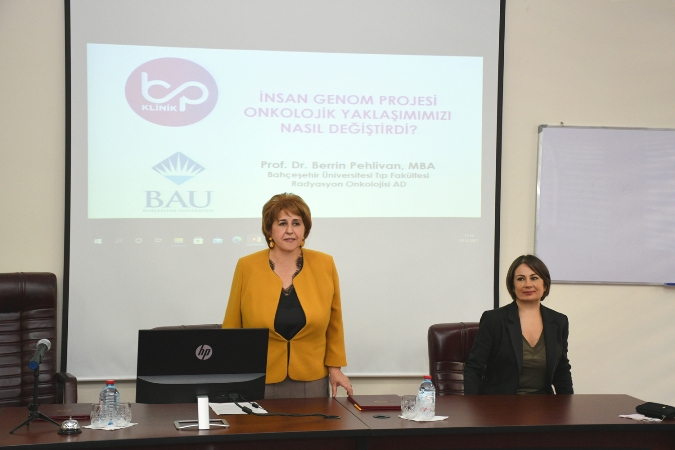 Well-known Turkish professor in the field of radiation oncology held a seminar at the Institute of Molecular Biology and Biotechnologies + Photo Oct 28, 2021 | 18:00 / Seminars

Well-known specialist in the field of radiation oncology in Turkey, oncologist, prof. Dr. Berrin Pehlivan visited the Institute of Molecular Biology and Biotechnology of ANAS during her visit to Azerbaijan.

At the meeting, academician Irada Huseynova spoke about the ongoing cooperation between the two brotherly countries in all areas. She also spoke about the great victory of Azerbaijan, which will soon celebrate its anniversary. The Vice President said that during the 44-day Second Karabakh War, brotherly Turkey stood by Azerbaijan and provided moral support.

The sides noted the possibility of establishing cooperation between the clinic headed by B. Pehlivan and the Institute of Molecular Biology and Biotechnologies, the application of new methods, and the implementation of joint projects in the future.

Then prof. Berrin Pehlivan trained the staff of the institute.

Introducing the guest to the staff, academician Irada Huseynova noted that Professor Berrin Pehlivan, who is visiting our country for the third time, has extensive experience in the field of oncology.

Academician Irada Huseynova said that Berrin Pehlivan is a graduate of Hacettepe University Medical Faculty, she noted that the scientist conducted research and experiments at the Department of Radiation Oncology, Boston University. She noted that Berrin Pehlivan, who has worked abroad for a long time, has conducted research on the application of global technologies in the fight against cancer, and has been involved in many scientific studies on tumor cells in France and Switzerland.

Then prof. Berrin Pehlivan, delivered a lecture on the topic "How has the Human Genome Project Changed the Oncology Approach?". She said she has been working in the field of radiation oncology for 20 years. She noted that although cancer was one of the incurable diseases years ago, it can be treated in modern times. According to the scientist, thanks to the development of molecular oncology and the application of the latest technologies in this field, it is possible to say that cancer is now a treatable disease.

The professor noted that the implementation of the "Human Genome Project" has made great progress in the field of cancer, informed about the benefits of chemotherapy, functional MRI, the stages of development of radiotherapy devices, organ-based approaches.

Berrin Pehlivan said that the number of drugs approved by the US Food and Drug Administration (FDA) in the field of lung cancer increased significantly in 2019 compared to 2010: “Instead of standard drugs, it is preferable to treat the patient individually and use drugs that suit his current condition and type of tumor”.

She spoke about chemotherapy, radiotherapy, surgical methods, and their purpose in the treatment of cancer, and noted the modern technologies used in radiotherapy. Professor noted that with the right targeting, it is possible to prolong the patient's life, reduce side effects, improve living standards, as well as implement new treatment strategies.

The professor answered questions about proton therapy, targeted therapy, radiotherapy, chemotherapy, immunotherapy, the effect of mutations in genes on the formation of tumor cells, the changes caused by COVID-19 in the human body.