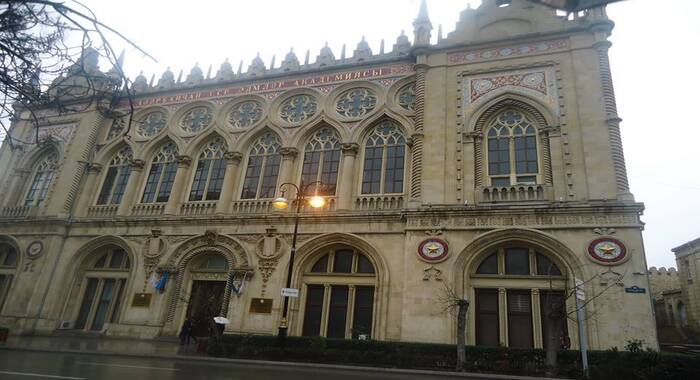 Next meeting of the Presidium of Azerbaijan National Academy of Sciences ANAS) was held.

President of ANAS academician Ramiz Mehdiyev opened the event and informed on the issues of agenda.

In advance, priority scientific directions of ANAS were discussed. Academician Ramiz Mehdiyev said that in the context of rapidly changing scientific directions, professions and specialties in the world, expanding the use of high technologies, priority directions of Azerbaijani science should be revised, development trends of modern science and in other hand social-economic, progress directions of the country should be mainstreamed in defining of these priorities. Ramiz Mehdiyev, in particular, emphasized the importance of strengthening scientific-innovative activity, noting the necessity of taking concrete steps in this regard. Following the discussions, the members of the Presidium and relevant bodies of the ANAS were assigned tasks due to identify new scientific priorities.

The next scientific - organizational issue in the agenda was the Action Plan on optimization of the activity of ANAS. Academician Ramiz Mehdiyev said that complex measures should be taken in carrying out fundamental and applied researches of ANAS on up-to-date standards, modernizing management system and scientific infrastructure in the realm of science, training of highly qualified staff, integrating science and education, improving social walfare of researchers, strengthening normative-legal base and information security of science, including accelerating integration of Azerbaijani science into the global scientific scope. Therefore, appropriate Action Plan for optimization of ANAS activity has been developed. At the meeting, Action Plan was widely discussed, and the relevant divisions of the Academy, scientific instituions and organizations as well as relevant departments of the Presidium of the ANAS were given appropriate instructions in this regard.

The next scientific-organizational issue for discussion was the preparation of the multivolume “History of the Republic of Azerbaijan (1991-2020)”. Academician Ramiz Mehdiyev informed the participants that the preparation of a separate book on the history of independence of modern Azerbaijan, which is the architect of national leader Heydar Aliyev, is of great scientific and social importance. He said that in the early 1990s, thanks to the rescue mission of the great leader Heydar Aliyev, Azerbaijan embarked on economic recovery, social-political and social progress. As a result of the work of the President of the Republic of Azerbaijan Mr. Ilham Aliyev, who has successfully continued the policy of state building of the great leader Heydar Aliyev, international authority of our country has rapidly risen and significant progress has been made in the socio-economic development. Academician Ramiz Mehdiyev said that the multivolume edition to be prepared should reflect the socio-political realities of our independence history, successes and achievements. Then the structure of the multivolume “History of the Republic of Azerbaijan (1991-2020)” was discussed and appropriate tasks were given for its preparation.